Album Review: Against The Gun by Celebration Summer

Celebration Summer are a four piece band from Washington DC brought together by a shared love of late 80s/early 90s melodic punk rock. Channeling bands such as Leatherface, Samiam and Hot Water Music, Celebration Summer released their debut EP (excluding a demo and a cover) Against The Gun on Little Rocket Records in November of 2020. I discovered it by searching out bands for an upcoming CPRW Records compilation and enjoyed them so much I had to review it as well. 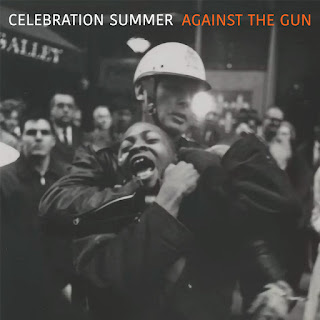 Against The Gun begins with Bitter End. The song opens with each instrument coming in separately. This is a great way to start as it has you listening intently and builds towards the vocals. Having hopefully already read the introduction to this review I’m sure you can guess what the vocals are like from the bands listed but, in case you don’t know those bands, they are really powerful vocals, verging on gruff and really command your attention. The track is an extremely catchy one to start the EP and welcome you into what to expect from Celebration Summer on the rest of the EP. Up next is I Don’t Want To Be A Burden. The track begins with some uptempo guitars before some sharp vocals come in. Something that always catches my attention is when a song starts with a question so my ears well and truly pricked when I heard the opening line of “what did it mean?” This is a song about self improvement and trying to save a relationship, perhaps something most of us have related to at some point in time. This is definitely a song that is listened to best when it’s really, really loud.

The third song on Against The Gun is My Devotion. The vocals on the track, for the most part, felt a lot more restrained than on the previous two songs – really allowing the driving guitars, melodic bass and intricate drums to shine. As the song progresses it feels as if the reins get looser and looser and this really adds a lot more emotion to the track. The track is about trying to navigate your way through life and how it can feel like your wheels are spinning, things move on and you get left behind. Another really relatable subject. The final song is the six minute epic Against The Gun. This is an incredibly powerful song and one of the most poignant of 2020. It’s a song that is about feeling like everyone is against you and knowing they won’t come to your aid even when your life is at risk. The song begins with cries of “I don’t know how much more of this I can take”, this immediately shows the anger and frustration that lead singer Nate has with how they are treated. I don’t know whether or not this song was written before or after the moment when George Floyd was shot by American police officers last year but that moment really opened up a lot of people’s eyes to the horrible racism that happens in the USA and all over the world, making this song and songs like it even more poignant. If you only listen to one song on this EP, I really suggest it be this one.

Celebration Summer are a band I expect to hear a lot more from in future years as they are superb. Hopefully their relationship with Little Rocket Records will allow them to tour the UK sooner rather than later as this is a band that I feel like a lot of people will enjoy and deserve your attention.

It’s Frankie Knuckles’ birthday, so here’s a selection of some of his best early remixes and edits