Is there a better way to start the first week of 2021 than by finding a new band releasing their debut album? After 2020, it’s hard to ask for anything more, and I was fortunate to make Zoanoids my first CPRW review of the year.

Honestly, I almost skipped over their record while perusing Bandcamp because… I don’t know, the black and white zombie-looking face outline with oozing font didn’t seem like it’d be quite my thing. But, I pressed play, and then pressed play again, and then kept listening until I decided I had to own it on vinyl. 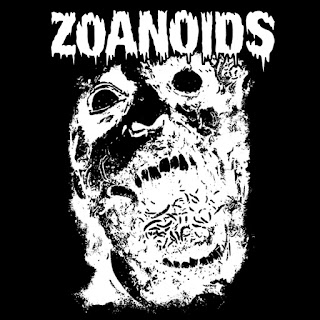 A four-piece out of Kalamazoo, Michigan, Zoanoids are a self-described “horror and sci-fi Ramonescore band” that put out a demo in 2019 and released a few singles in 2020 leading up to their eponymous debut on Hey Pizza! Records. As a person that hates horror movies (of all the emotions to feel, why would you want to feel horror?) and is pretty indifferent to most Ramonescore bands, they still have a lot to offer (and if you do like those things, you’ll likely dig this).

The LP begins with “Teenage Werewolf”, a jam that they also released a music video for back in October. I’ll have to wait to see if the vinyl comes with a lyrics sheet, but even though I don’t know all the words to it yet, I had the line “I don’t wanna be a teenage werewolf” stuck in my head the rest of the day after hearing it. I admit I can get a little judgy about opening tracks, but this is a great start to the record.

Two of my favorite songs on the first side had some unfamiliar names, so I had to look to the Internet for some answers. I’m not totally sure that I’ve gotten these correctly, but from what I can tell, Ahriman (“Arms of Ahriman”) is the evil, destructive spirit in Zoroastrianism, an ancient pre-Islamic religion of ancient Persia. Biollante (“Biollante’s Revenge”) is a giant monster (or kaiju) from the 1989 film Godzilla vs. Biollante. The plot seems weird and makes me want to see it. Both of these tunes have a cryptic, ominous vibe to them that I really dig, and showcase not just stellar songwriting, but the vocalist’s ability to actually sing while maintaining a voice that fits great in the genre.

“Time of Judgement” is also a banger, “Dos Fuertes” is a frenetic instrumental, and “Michigan” is a not-so-complimentary ode to their home state. Zoanoids are also able to mix it up, with “Overlord” on the second side as a breezy, almost ballad that changes the tempo a bit, before plummeting back into chaos on “Directive: Solbrain”.

Overall, it’s 13 tracks in 27 minutes, with only two tunes passing the two and a half minute mark, and it’s a record that I found myself listening to front to back, and then front to back again. Sometimes I felt like the friend in the group who is kind of chuckling along at all the references the group is making without actually knowing what they all mean, but it’s a party and I’m sure I’ll figure them out later.