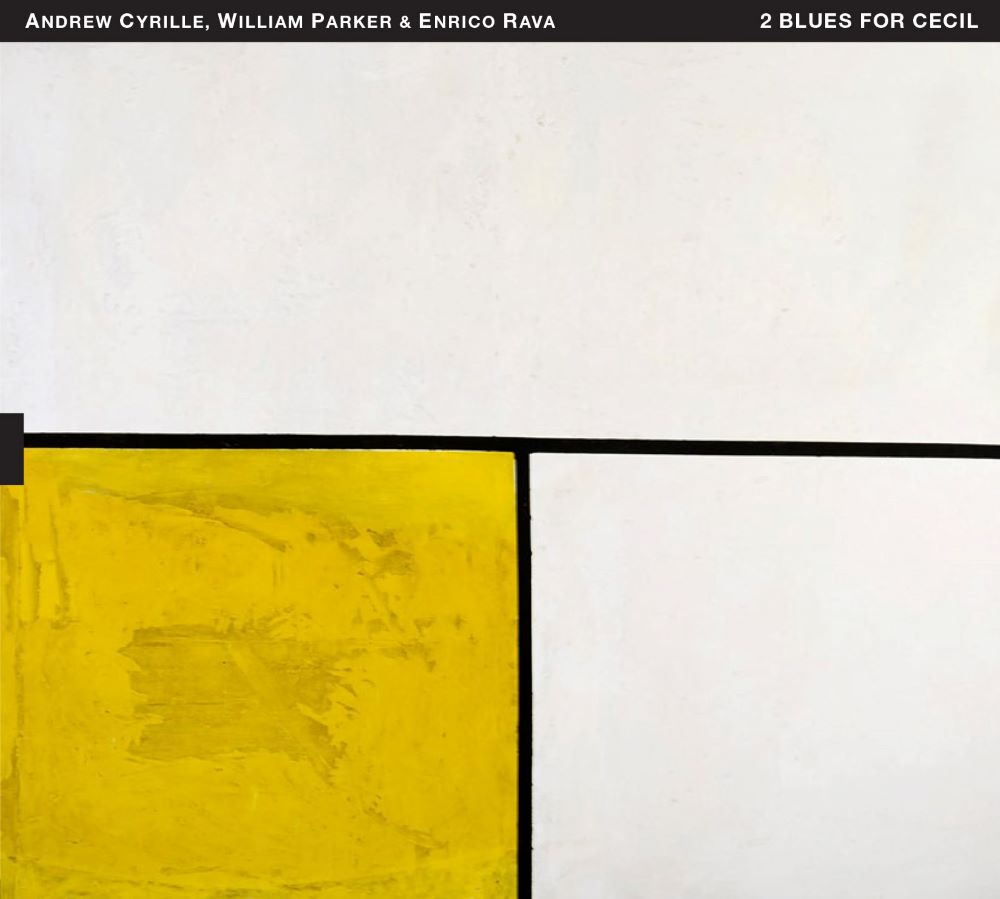 2 Blues For Cecil brings together three legends of modern improvised music, drummer Andrew Cyrille, bassist William Parker and flugelhornist Enrico Rava, in a tribute to the late, great pianist and bandleader Cecil Taylor (1929-2018). Although the three played together for the first time as members of this trio, they share a common bond through their separate time spent performing and recording with Taylor.
Enrico Rava and Andrew Cyrille are among the elders of improvised music with their careers going back to the 1960s. William Parker rose to prominence during New York’s loft jazz era of the 1970s. The three musicians share one major link in their respective careers. Namely, they all have at different times been members of Cecil Taylor Unit or other ensembles of the legendary late pianist and bandleader Cecil Taylor.
Rava, Parker and Cyrille first performed together as a trio in a tribute to Cecil Taylor, with Taylor himself present, at the Whitney Museum in April 2016 as part of an exhibit/program under the heading “Open Plan: Cecil Taylor.” 2 Blues For Cecil was recorded on February 1 and 2 at Studio Ferber in Paris following the trio’s concert on December 31, 2020 under the heading “Tribute to Cecil Taylor” as part of the Sons d’hiver festival in Paris.
While 2 Blues For Cecil features compositions by all three of its members and even a standard, the emphasis is on improvisation. Four of the ten tracks are extended collective improvisations, including two versions of “Blues for Cecil.” The trio does not seek to emulate Cecil Taylor’s approach to creating music but rather draws on all the experiences, separate and shared, of its members. 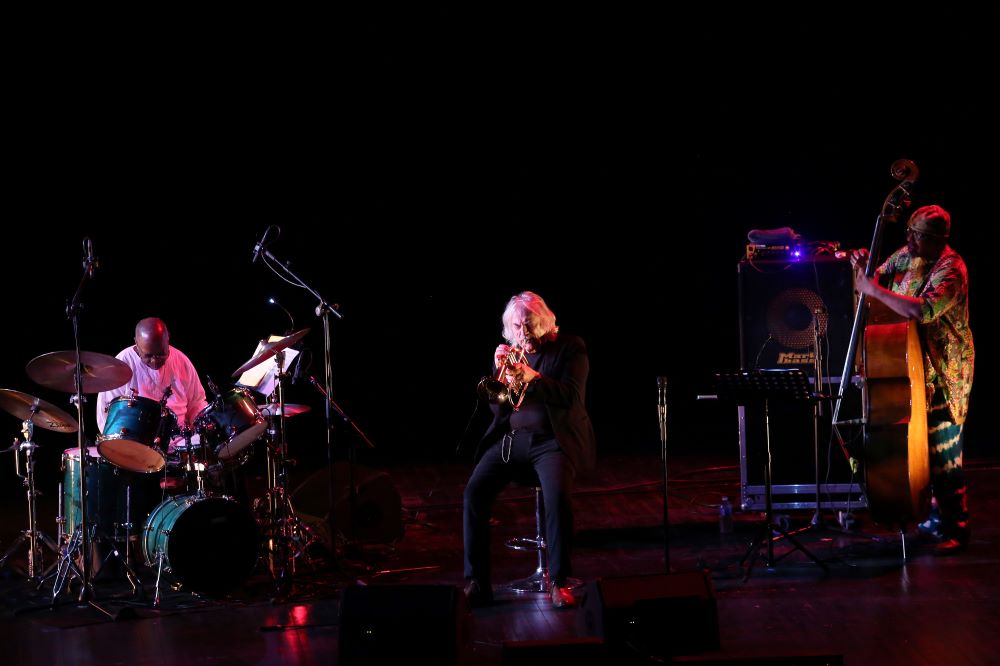 “Cecil was a spokesman for individuality, a musical warrior always operating on a high level,” says Parker. “He was not avant-garde, he was a human being who loves life as music. He would not be boxed in by the music world’s value system that asks artists to conform to their standards.”
Although Andrew Cyrille was already an accomplished young musician at the time, his international breakthrough came with his membership in the Cecil Taylor Unit, which lasted for over a decade (1964-75), during which he established his position as one of the leading drummers in freely improvised music and participated in some of Taylor’s most legendary recordings. More than five decades later, Cyrille is still considered to be one of the most creative and versatile percussionists in modern jazz, equally at home in a modern mainstream setting as with more avant-garde music.
Similarly, William Parker first recorded with Frank Lowe, Billy Bang and many others in the 1970s but became internationally recognized when performing with the Cecil Taylor Unit in 1980-91 and participating in more than ten recordings led by Taylor. Parker is now best known for the many groups he has led or co-led over the past four decades. As well as being an improviser, writer and poet, Parker is a prolific composer and has composed everything from operas, oratorios, ballets and film scores to soliloquies for solo instruments. To date, he has participated in approximately 500 recordings with well over 50 albums under his own leadership.
Enrico Rava began his career in his native Italy in the mid-1960s but his work with saxophonists Gato Barbieri and Steve Lacy led to years spent living in New York City in the late 1960s and early 1970s and working with many of the musicians then active on the New York improvised music scene. Soon, Rava began recording under his own name. With more than 50 recordings as a leader or coleader, he is one of the most internationally known Italian jazz musicians and one of the best known in all of Europe. Although Rava met Cecil Taylor in the late 1960s in New York City, the two performed together for the first time almost two decades later, first in Taylor’s Orchestra Of Two Continents in 1984 and then in the Cecil Taylor European Orchestra in 1988. 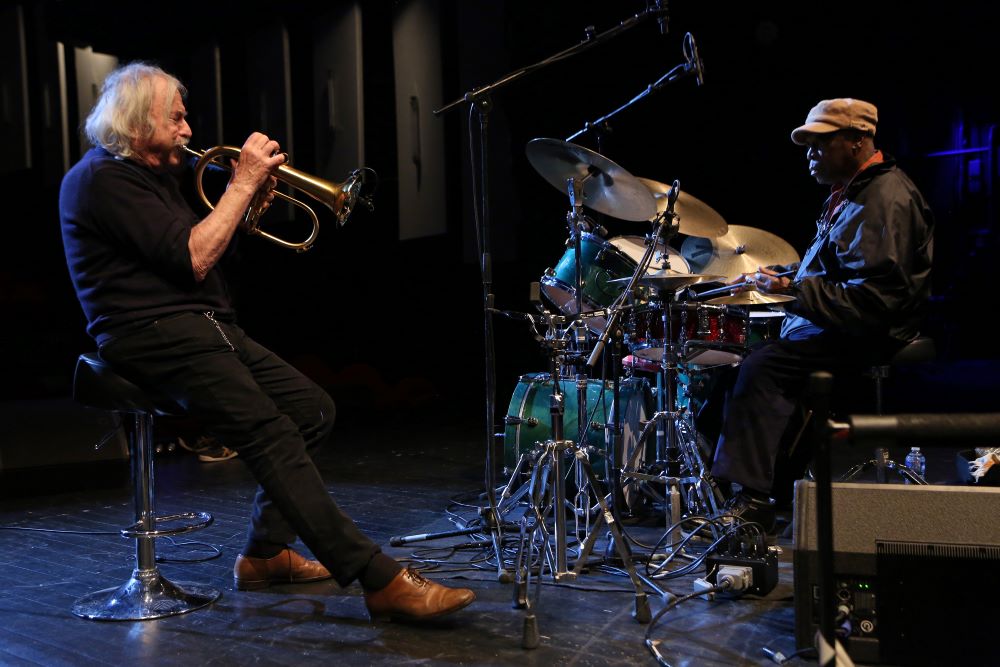 Andrew Cyrille (b. 1939) was born in Brooklyn, New York, into a family with Haitian parents. He was mentored in the art of drumming by the great Philly Joe Jones circa 1958 and began recording and performing with the likes of Walt Dickerson, Coleman Hawkins, Roland Kirk and Mary Lou Williams when barely 20 years of age. However, Cyrille truly made his mark through his membership in the Cecil Taylor Unit, which lasted for over a decade (1964-75), during which time he established his position as one of the leading percussionists in the then emerging freely improvised music. Cyrille soon became one of the most respected drummers in modern jazz through both of his own recordings as a leader and through his collaborations with virtually every important name on the contemporary scene. Since the 1970s, Cyrille has led or co-led a number of ensembles, including Maono, The Group, the percussion quartet Pieces Of Time and Haitian Fascination that pays homage to his Haitian roots. In 1992, Oliver Lake, Reggie Workman and Cyrille founded Trio 3, a cooperative group that has over time become one of the main performing vehicles for all three of its members, recording more than 10 albums with several of the later ones also featuring a visiting pianist. Altogether, Cyrille has released more than 30 recordings as a leader or co-leader and countless others as a sideman. His most recent recordings as a leader are The Declaration Of Musical Independence (with Richard Teitelbaum, guitarist Bill Frisell and bassist Ben Street) in 2014, Lebroba (with trumpeter Wadada Leo Smith and Bill Frisell) in 2017 and The News (with pianist David Virelles, Bill Frisell and Ben Street) in 2019. In 2020, Cyrille received the Doris Duke Artist Award. 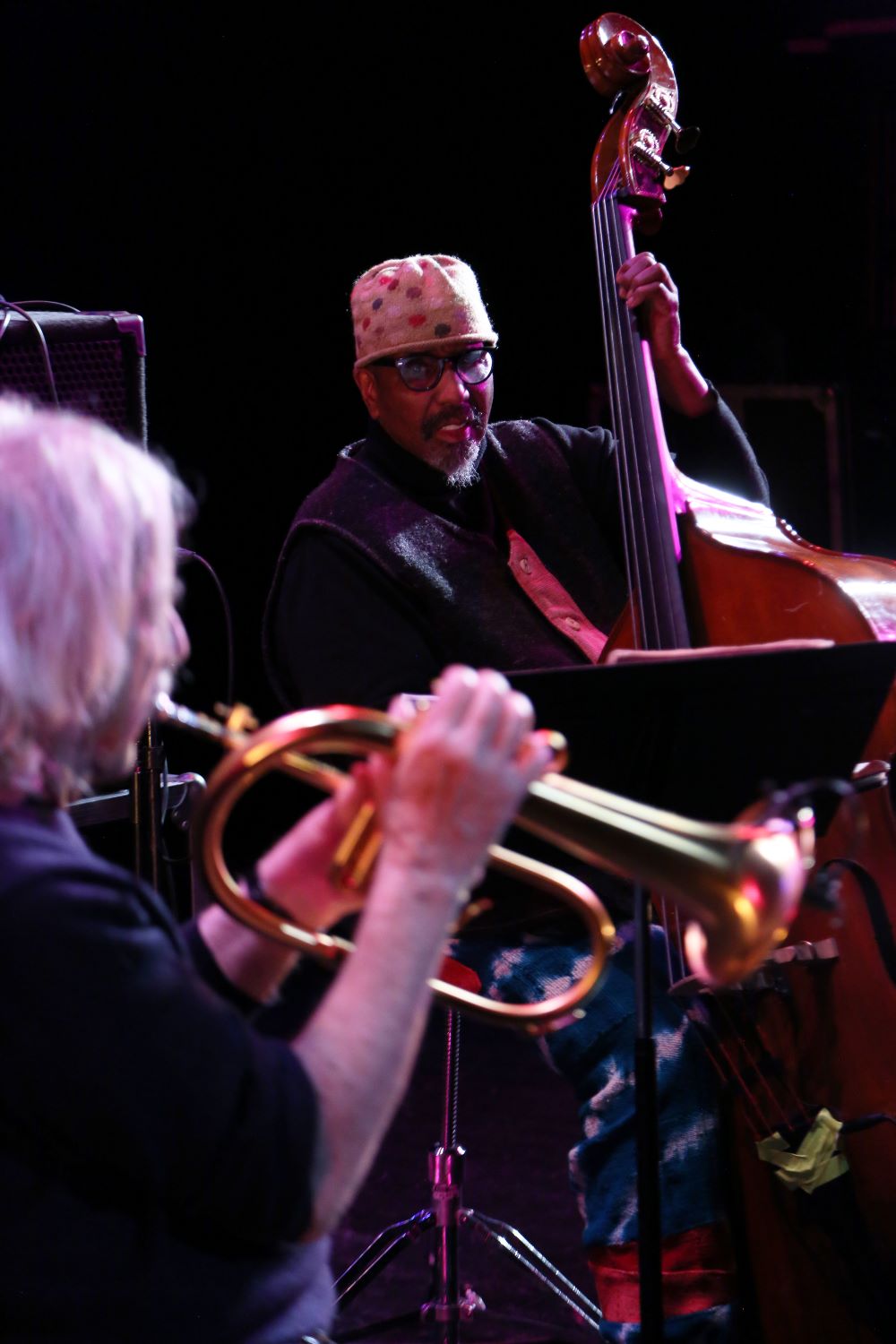 Photos ©Luciano_Rossetti
William Parker (b. 1952) is a composer, improviser, multi-instrumentalist, writer and poet born in the Bronx in New York City. He entered the music scene during New York´s loft jazz era in the early 1970s and quickly became a much sought-after bassist playing primarily with fellow improvisers, such as Billy Bang, Don Cherry, Milford Graves, Khan Jamal, Frank Lowe, Jemeel Moondoc, Charles Tyler and Frank Wright, among many others. Parker became internationally recognized when playing in the Cecil Taylor Unit from 1980 through 1991. Parker´s key collaborators have also included his spouse, dancer Patricia Nicholson, as well as Roy Brown, Peter Brötzmann, Rob Campbell, Cooper-Moore, Hamid Drake, Charles Gayle, Peter Kowald, Joe Morris, Matthew Shipp and David S. Ware. Since the early 1990s, Parker has increasingly led his own ensembles, including In Order To Survive, The Little Huey Creative Music Orchestra and the William Parker Quartet. Parker’s special projects have featured the music of Duke Ellington, Curtis Mayfield and Fats Waller, among others, and he has released several solo bass recordings as well as several duo recordings with fellow bass players. To date, Parker has participated in approximately 500 recordings, including well over 50 albums under his own leadership. Parker is a prolific composer and has composed everything from operas, oratorios, ballets and film scores to oliloquies for solo instruments. He is also a theorist and the author of several books as well as volumes of poetry.
Enrico Rava (b. 1939) was born in Trieste, Italy. Rava began playing the trombone in Dixieland bands when he was 15 but switched to the trumpet at 18 after hearing Miles Davis perform in Turin. Soon Rava was participating in local jam sessions and, in 1963, the Argentine saxophonist Gato Barbieri, who was then living in Rome, convinced Rava to join him there. Rava’s first recordings were in the mid-1960s with Gato Barbieri, Giorgio Gaslini and Steve Lacy. After Barbieri moved to Paris, Rava joined Steve Lacy’s quartet, which led to extended stays in London, South America and eventually New York City. After moving to New York City in 1967, Rava soon played with many of the local musicians then active on the improvised music scene, such as Carla Bley, Lee Konitz, Jeanne Lee, Paul Motian and Roswell Rudd. Rava traveled back and forth between the United States and Europe and began making records both in New York City and in Europe with increasing frequency.
Rava’s first albums as a leader were with the Enrico Rava Quartet in 1972 and 1973. His first album for ECM Records was The Pilgrim And The Stars in 1975 and thus began a relationship that still continues today and has resulted in a total of 15 albums with the most recent being Edizione Speciale in 2021. Rava has also continued to work with many other European improvisers, including concerts and recordings with a number of large ensembles, such as ICP Orchestra, Globe Unity Orchestra and Italian Instabile Orchestra. Altogether, Rava has participated in more than 200 recordings with more than 50 of those as a leader or co-leader.Although Rava met Cecil Taylor in the late 1960s in New York City, the two did not perform together until almost two decades later. Rava participated in the recording of Winged Serpent (Sliding Quadrants) in Milan in 1984 by Taylor’s Orchestra Of Two Continents as well as the European tour that followed. In 1988, Rava was a member of Cecil Taylor’s European Orchestra.
01 Improvisation No. 1 (Cyrille, Parker and Rava)
02 Ballerina (Enrico Rava)
03 Blues For Cecil No. 1 (Cyrille, Parker and Rava)
04 Improvisation No.2 (Cyrille, Parker and Rava)
05 Top, Bottom and What’s in the Middle (Andrew Cyrille)
06 Blues For Cecil No. 2 (Cyrille, Parker and Rava)
07 Enrava Melody (Andrew Cyrille)
08 Overboard (Enrico Rava)
09 Machu Picchu (William Parker)
10 My Funny Valentine (Richard Rodgers and Lorenz Hart)
Enrico Rava flugelhorn
William Parker double bass
Andrew Cyrille drums
TUM Records

WARRIOR SOUL back with the highly anticipated NEW album ‘Out On Bail’ out on March 4.

KAINE REHEARSALS AT UNIT ONE TODAY