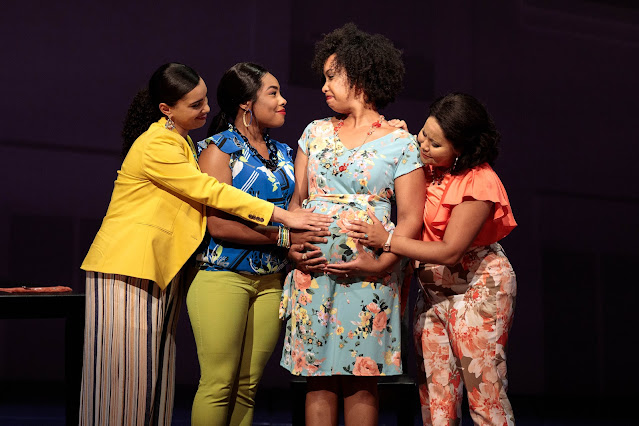 Seattle Opera continues its 2021/22 season with a dynamic lineup of opera events, including community conversations, artist recitals, laser shows, and a timely and award-winning opera.

Leading the slate is Blue (February 26–March 12, 2022 in McCaw Hall), named the 2020 winner of Best New Opera by the Music Critics Association of North America. This portrait of contemporary African American life is the creation of librettist Tazewell Thompson (winner of five NAACP Awards and two Emmy nominations) and composer Jeanine Tesori (Tony Award winner best known for Fun Home). A story of love, loss, church, and sisterhood, Blue depicts a young couple celebrating the joy of family with the birth of their son. Later they lean on close-knit community in the wake of their son’s death at the hands of a police officer.

“I did not want to write about a family that was struggling,” says the opera’s librettist, Tazewell Thompson. “There has been enough of Black struggle and dysfunction on the screen and stage: absent fathers and desperate single mothers barely surviving. I wanted to show a positive household moving forward. In Blue, The Mother is educated and talented with equally talented and educated girlfriends. Surrounding The Father, a police officer, are his best friends, fellow police officers, men who are responsible, wonderful, aspiring fathers to their children.”

That focus on community has been particularly poignant for the opera’s singers. “Black love, community, and relationships are the real heart and soul of this opera,” says bass Kenneth Kellogg, who reprises his role as The Father from the original 2019 Glimmerglass production. “It opens you up in ways that are, hopefully, life changing. When we first performed it, people came up to me afterwards in tears, thanking me. I believe Blue is a life-changing experience.”

“Blue does not attempt to answer the longstanding complexities of race and violence that our nation has been grappling with for decades,” says Gordon Hawkins, who plays The Reverend. “Rather, it is an attempt to place us together in the same room of humanity, face to face, so that we may address these issues head-on…together.”

Composer Jeanine Tesori hopes that audiences will “travel in the shoes of the characters they see on stage—to vest so heavily in the character’s victories and tragedies that they experience them as their own. That is what causes the audience to cry and laugh. The character’s story is the audience’s story.”

To guide conversations surrounding the opera, Seattle Opera will center the voices of its artists and Black American community partners. “In presenting an opera as timely as Blue, we wanted to create space for our broader community to reflect on how the opera’s themes relate to their everyday lives,” says Alejandra Valarino Boyer, Seattle Opera’s Director of Programs and Partnerships. “Our community programming will give audiences the chance to hear directly from the artists about their experiences staging this work, as well as to join in the conversation about how the opera addresses the challenges and opportunities facing Seattle’s Black communities.” All community events are free and open to the public.

Opera Talk: Featuring the Cast of Blue
February 10 at 7:00 PM, Tagney Jones Hall and livestreamed on YouTube
This conversation, moderated by Classical KING FM’s Artist- and Scholar-in-Residence, Dr. Quinton Morris, will feature the lead cast members of Blue in discussion about their artistic relationship with the opera.

Becoming Blue: A Talk with Tazewell Thompson
February 25 at 7:00 PM, Tagney Jones Hall and livestreamed on YouTube
To delve deeper into the creative journey behind Blue, Seattle Opera’s Scholar in Residence, Dr. Naomi André, will sit down with Blue librettist Tazewell Thompson.

Community Conversations
February 2022, Tagney Jones Hall and livestreamed on YouTube
In partnership with The Northwest African American Museum, Seattle Opera presents a set of Community Conversations that will delve into topics illustrated in Blue and explore how they relate to Seattle’s Black communities. Dates and times will be announced later this winter.

In addition to its programming centered on Blue, Seattle Opera will present four diverse and engaging musical programs that explore the full range of operatic expression:

Artist Recital: Key’mon W. Murrah
February 4 at 7:30 PM, Tagney Jones Hall
Fresh off his appearance as Orpheus in Orpheus and Eurydice, countertenor Key’mon W. Murrah kicks off Seattle Opera’s celebration of Black History Month with a program of spirituals and African American art song that shows off his “rich tone and terrific presence” (Aspen Times). Works by Duke Ellington, Moses Hogan, Jacqueline Hairston, and Roland Hayes offer a message of hope that draws on Murrah’s experiences growing up in Louisville, KY. Don’t miss this opportunity to hear a renowned countertenor in the intimacy of Tagney Jones Hall!

In search of Bach’s Cello Suites