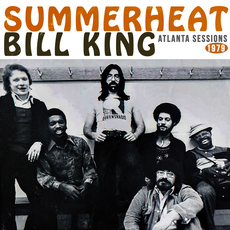 Mid-1978 in Atlanta, Georgia, I was between sessions with southern soul singer Len Wade with my long-time Jamaican drummer and guitarist Everton ‘Pablo’ Paul and Wayne McGhie in town and hanging at our bungalow in Marietta, Georgia. Wade was pacing about, stretching out studio time. I realized that with time booked and still in play, Why not drop a few studio jams on tape? I grabbed a pen and pad and started writing chord patterns and basic themes. One by one, we recorded. I do this with two rhythm sections, one anchored by legendary NYC bassist Harvey Brooks of Miles Davis Bitches Brew and Bob Dylan’s Self Portrait, and Florida’s King of White Soul—Wayne Cochran’s drummer Kevin White also Pablo and Wayne. Nine tracks recorded over the two sessions. Out of these comes, the radio hit Summerheat featuring McGhie, King, Billy McPherson and Paul—string arrangements by Skip Lane.

While on tour with saxophonist John Klemmer a year earlier, we played the Fox Theatre in Atlanta and afterwards hit a jam session downtown. From that session, a memory of an illustrious saxophonist who embraced the best of southern soul and contemporary jazz, Billy McPherson. That memory sent me in search of this local hero and hiring for the recording.

Summers in Atlanta were a mix of excessive humidity, and temperatures hovered in the mid-nineties. Late at night, sweat drips from the leaves of magnolia trees. You could hear the incessant howling of cicadas view the rigid grip of the Kudzo vine wrap its massive tentacles across the landscape. Summerheat captures that life with its bracing reggae rhythms, lush strings, and melodic and harmonic inflection.

A note about the cover photo. Prior to Atlanta the players in photo were part of my house band at the El Mocambo in Toronto. Everton Paul, Wayne McGhie and Tommy Cosgrove played on these sessions. Kenny Baldwin down front was my long-time tenor man, and George Philip right introduced me to reggae.

Preview: The Modernism of Louis and co (Jan 24 & week)