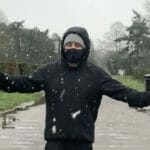 Creeping back into the scene with haunting conviction, Burial has finally gifted fans his long awaited EP, Antidawn. Severing his sound from his well-established roots in UK garage and reggae dubstep persuasion, the venerated producer has gone a vastly different route—one that can only be described as stunningly dissociative.

Beginning with intricately produced crackling that seeps into the listener’s ear, Antidawn slinks in with an ambient dexterity, leading into eerie vocals for the first track, an 11-minute voyage across what has been depicted as “no man’s land.” Each sonic excursion takes the listener on a journey through piercing isolation, averaging about nine minutes per song.

The long-awaited project follows 2020’s two-track EP Chemz / Dolphinz, departing from the endeavor’s vibrating UK hardcore palette and introducing a side of Burial that fans will undoubtedly sink their teeth into, one expertly crafted conquest at a time.

Pre-order the vinyl or CD editions via Bandcamp for their January 28 release. In the meantime, immerse yourself below.

WARRIOR SOUL back with the highly anticipated NEW album ‘Out On Bail’ out on March 4.

KAINE REHEARSALS AT UNIT ONE TODAY