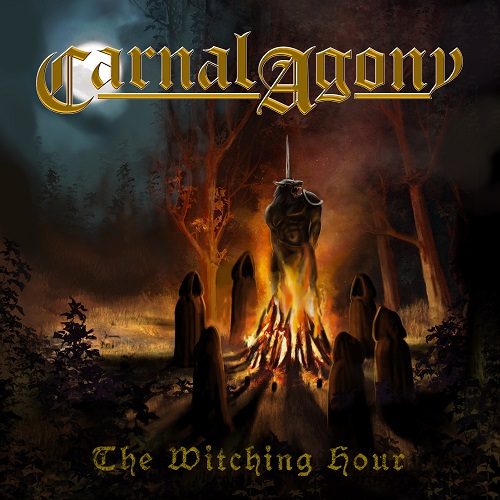 If Judas Priest and hit songwriter Desmond Child had a love-child, it would undoubtedly be a hideous creature with sex appeal. Much like Carnal Agony. Hailing from northern Sweden, the band is on a mission to pick up the torches left behind by their musical heroes. Their incendiary blend of metal energy and pop melody, spiced up with classical horror themed lyrics, is now ready to be unleashed upon the world.

Building on and further expanding the musical direction of debut album ‘Preludes & Nocturnes’, the second album ‘Back from the Grave’ is already a success with critics and audiences alike. With well over 300 000 Spotify-streams in just a few months the first two singles from the album, ‘Werewolf of Steel’ and ‘Love Will Tear You Apart’, have proven Carnal Agony’s ability to write memorable melodies.

In order to let even more people discover the treasures within “Back from the Grave”, the band is now releasing one of their favorite tracks as a follow-up single.  “The Witching Hour” is the perfect example of the  foundation that the band builds their music upon and showcases  the bands Unholy Trinity of headbanging rhythms, larger-than-life choruses and irresistible scary stories to tell in the dark.

With music and lyrics by Mathias Wallin, the track was recorded at Studio Seven Sweden in Örebro by Ronny Milianowicz. “‘The Witching Hour’ is unusual for us with it’s clear influences from bands like Whitesnake, Heart or Survivor. They’re a part of my musical DNA as well and it was fun to explore that and try to infuse it with metal”, says Mathias. “And when I got the chorus melody in my head I knew I had something special going on.” Guitarist Pär-Olof Persson agrees: “The moment I heard the song for the first time I decided that we had to record a new album. I can’t wait to play this song live!” Vocalist David Johagen chose a different approach to his vocal delivery on the track. “The lyrics called for a more storytelling feeling than the other tracks. I wanted to convey the curiosity, horror and ultimately power in the character’s development and I think that you can hear it in my voice. Hopefully you’ll become afraid, disgusted and intrigued.” The Witching Hour is upon us!

“The Witching Hour” is available for streaming and digital download at all major digital services.