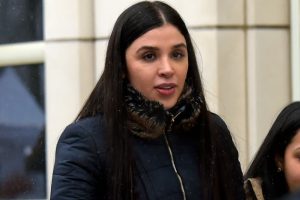 El Chapo’s wife, Emma Coronel Aispuro is facing charges of participating in a conspiracy to distribute cocaine, methamphetamine, heroin, and marijuana for importation to the U.S.

Ms. Chapo was arrested at Dulles International Airport. But that’s not the craziest part of the story.

TMZ reports that the Feds are accusing her of conspiring with others to help El Chapo escape a Mexican prison in 2015. They made another attempt but he was extradited to the United States before the second escape could happen.

Emma was hailed as a ride or die following a rare interview where she claimed that she never saw him do anything illegal. “I think it’s what any wife would do in my place, be with her husband in difficult times,” she said when explaining why she decided to stand with her husband during his trial.

Meanwhile, the Kingpin’s mistress, Lucero Guadalupe Sánchez López flipped on him. Sanchez testified that she helped him purchase hundreds of kilos of marijuana and helped him escape from prison.

El Chapo’s wife was reportedly set to appear on the reality series, Cartel Crew but that doesn’t seem like it’s going to happen.

Joaquin “El Chapo” Guzman was sentenced to life in prison in July 2019.

The post El Chapo’s Wife is Reportedly Arrested for Drug Trafficking appeared first on The Source.