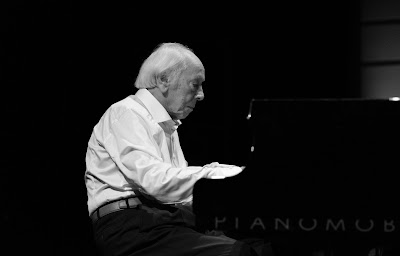 One of Fred Van Hove’s credos was that improvised music didn’t exist before it was played. He believed that the improvising musician had to create his own vocabulary on his instrument in order to achieve a unique sound. “Improvisation, you have never heard it before and you will never hear it again because it will never be the same again“, he said. Now Fred Van Hove, the great Belgian pianist, improviser, composer, accordionist, organist, juggler and prankster is dead. The European free music scene, with whom his name will always be connected, will never be the same again as well.

Born 1937 in Antwerp (his name is attached to this city almost as much as the one of Peter Paul Rubens), Fred Van Hove studied piano, theory and harmony at the Music Academy in Belgium and experimented with several jazz styles before making the transition to free improvisation. 1966 saw the beginning of his collaboration with Peter Brötzmann and Han Bennink. To this day it’s rightfully considered one of the most seminal formations in European free jazz. One of the most striking characteristics of the trio’s music was the principle of contrasting means of creation, which were raised to the level of a principle. The fact that this was rooted in the different temperaments of the participating musicians was not difficult to recognize. Van Hove was the counterpart of the extroverted poles Bennink and Brötzmann, even if in his early playing the influence of Cecil Taylor shone through. Tongue-in-cheek, Van Hove claimed that his musical career was less influenced by Taylor’s playing than by the glockenspiel of the Antwerp churches. In his playing with Brötzmann and Bennink, he soon developed a strong individuality, with emotional outbursts and energy play increasingly fading into the background. Instead, he created a more and more complex style with tendencies towards oddness and even musical jokes, he sometimes integrated traditional stylistic elements, which he interpolated collage-like into the musical events. Van Hove counterpointed Brötzmann’s screams and Bennink’s hectic drumming with contemplative major triads and arpeggios. In this way he broke up the already consolidated free jazz techniques.

After the split of the trio, Van Hove went solo and somehow re-discovered his instrument. He manipulated and prepared the piano, he ran at full speed to create sonic waves, but always came back to a melody. His multi-stylistic approach can be seen in his solo LP Verloren Maandag, on which he dispensed with technical virtuosity on purpose and preferred to surprise, create suspense and tease the listener by using Flemish local colour, which sometimes seemed deliberately dilletante. He really was the avant-garde of free jazz piano at that time. “Improvising is another form of composing. Instant composing such as instant coffee, but not such a surrogate,”, he said. “Because of the lack of an external pattern, the music had to go back to its own inner tradition and its own inner nature. However, improvisation does not mean that the musical results, whether favourable or unfavourable , are random. On the contrary, the improvising musician remains open to all influences (…) because he has to play the music that each moment requires.” In his search of pure sound he used techniques anticipated by John Cage, Karl-Heinz Stockhausen and Iannis Xenakis. Apart from his solo work his duos and trios with Johannes Bauer were a perfect example of the quest for purity. Unfortunately, the duo remained unrecorded, but Organo Pleno (FMP, 1993) their trio with Annick Nozati (voice) is magnificent in its extravagance and evening-dress-madness.

Last but not least, even though his heart was set on improvisation, Fred Van Hove was also an outstanding composer, which he proved with ’T Nonet Fred Van Hove and on several WIM projects (Werkgroep Improviserende Musici, whose chairman he was for a long time).

Fred Van Hove has released a lot of outstanding albums, it’s difficult to select some from his great oeuvre. Certainly, the ones of the trio with Peter Brötzmann and Han Bennink are must-haves. My favourites are The End and Tschüs (both on FMP), but actually all eight are superb. From his solo albums Fred Van Hove (Vogel, 1973) and Verloren Maandag (FMP 1977) are really recommendable. One of my personal favourites is MLDD4’s Was macht ihr denn? (FMP/SAJ 1983) with Günter “Baby“ Sommer, Marc Charig and Phil Wachsmann. Highlights of his late work are Quat – Live at Hasselt (NoBusiness, 2013) with Els Vandeweyer, Paul Lovens and Martin Blume and Fred Van Hove at 80 (Dropa Disc, 2019), a 3-CD-box-set celebrating his 80th birthday.

In his last years Fred Van Hove suffered from dementia but at the Antwerp Summer Bummer Festival in 2019 he reunited with Peter Brötzmann for a last duo show. One of the organisers of the festival helped him on the way to the grand piano, the ten meters took him about two minutes. The audience gave him a big hand but after a minute or so the applause died down. Van Hove was surprised, stopped and looked at the audience and made them understand that they should move on. Everybody laughed and when he finally reached his destination he sat down very slowly – just to explode as soon as he started playing. An unforgettable moment.

Now Fred Van Hove, this true revolutionary, has passed away after a long illness. Hopefully, the chimes of the Antwerp churches will play a serenade for him.

and with in the legendary trio with Brötzmann and Bennink: