Goatwhore’s Sammy Duet on the New Record, Surviving 25 Years of Metal, and Recording in a Swamp 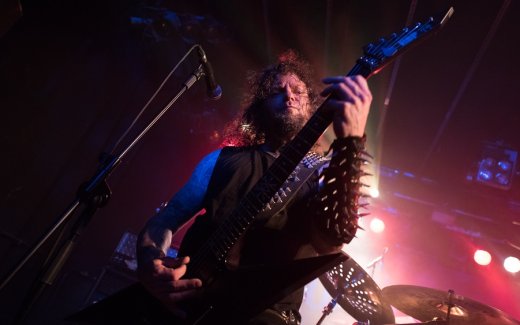 Not to call them old or anything, but Goatwhore have been around for a hot minute now. As someone who originally hails from the South, I remember when they were considered to be a scrappy, edgy young extreme sludge/blackened/death-influenced/whatever band out of our corner of the world.

Now, they’re an internationally renowned classic staple in the extreme metal universe. But that doesn’t stop them from pushing themselves further with every record and still having a bunch of love for their home state. We caught up with Goatwhore guitarist Sammy Duet to talk about the band’s new record Angels Hung From The Arches Of Heaven – which we enjoyed the hell out of – as well as what it was like to record it in a swamp, and hanging in there for 25 years.

How did the writing and recording of this album differ from previous records? Were there any major delays due to COVID, or did it come together pretty smoothly?

Well, we we were planning on taking 2020 off anyway to finish writing for this new record, so it kind of worked out a little bit. We had a bunch of stuff that was already written from 2018 and 2019, so we had the bulk of the record written, but we were going to take 2020 off to kind of refine everything, and then, of course, COVID hit, so that kind of got extended, which was a good thing because we never really had a whole lot of time to sit and stew on a record like this.

I’m not saying anything derogatory about our past records, but there are always a couple of songs where I wish we had another month or two to improve the song, just a bit more time. We usually have to worry about a deadline so we can go on tour. So I had a lot of time to refine the ideas, and it worked out. If Goatwhore were to end this afternoon, if we said, “That’s it; we’re not doing this anymore,” I wouldn’t be happy, but I would be satisfied ending on this record.

That’s a pretty strong endorsement of the new record. How do you feel having extra time impacted the lyrical themes and the overall themes, as well as the process of recording?

I didn’t write a whole lot of the lyrics on this record, but the parts that I did write were not cheerful. They’re very reflective of the way I was feeling during COVID, just the isolation and depression and everything. They kind of reflected that hopeless feeling that I’m sure everyone had at the time of, no one knows the future, and what if life is going to be like this forever? No one was really sure what was going to happen. So there’s a very overwhelming sense of dread, and a lot of the lyrics I wrote on the record are focused on that.

Even though I know you feel so strongly about this album that you’d be OK if it ended on this note, do you all have any plans in the works for the next record?

Well, being that we had two or three years off, there is a massive accumulation of songs that kind of got written during that period of time, so there’s definitely some songs that we didn’t use for the record that are probably going to get refined and used on the next record because when we went into the studio, I believe we had 15 or 16 songs completed, but we only opted to use the 11. We picked the ones that we felt were the most strong, the ones that we felt would be a good representation of the record. There’s still a lot of songs that were left over that are completed and just need to be refined.

Y’all have been around for 25 years now, which is an incredibly long time in metal years, and you’ve accomplished a lot. How do you feel like extreme metal has changed since you first started making music? What positives and negatives do you see?

I don’t really look at it as a positive or negative thing. As far as the scene, things change. As long as we’ve been around, we’ve seen shit change numerous times. As long as extreme metal is still present and flourishing, there are no real negatives, you know what I’m saying? But I could definitely say that when we started, there was this super elitist attitude that extreme metal fans and some of the bands sometimes had, like we had to prove ourselves back then. We weren’t accepted right off the bat.

Nowadays, I feel that the whole elitist attitude thing is kind of taking a back seat, especially within the black metal and death metal scenes. The kind of thing of “who is truer than who” is kind of diminishing somewhat.

How do you feel that Louisiana sound has grown over the years? There seem to be a lot of really cool bands coming out of there these days.

For this last record, we recorded at a studio in the country in Louisiana, and I think the last record we did in-state was Funeral Dirge for the Rotting Sun. I’m not going to talk bad about our old recordings, because they were all fantastic, but when you record here in Louisiana, there’s a certain vibe you can’t really put your finger on. We were recording in the middle of the fucking woods in a swamp, which I actually think added to the vibe, since we were kind of isolated in this forest, in the middle of fucking nowhere. We were just stuck at this studio, and if you wanted to go outside and get fresh air, you would just be in a swamp, you know? I think it added a whole new vibe to the record.

Goatwhore’s next album, Angels Hung From The Arches Of Heaven, will be released on October 7 and can be preordered today via Metal Blade Records.

The post Goatwhore’s Sammy Duet on the New Record, Surviving 25 Years of Metal, and Recording in a Swamp appeared first on MetalSucks.

Axl Rose Brained a G’n’R Fan with His Mic

Pantera Soundcheck “Cowboys From Hell” Ahead of First Show

Get Ready for the GG Allin Biopic