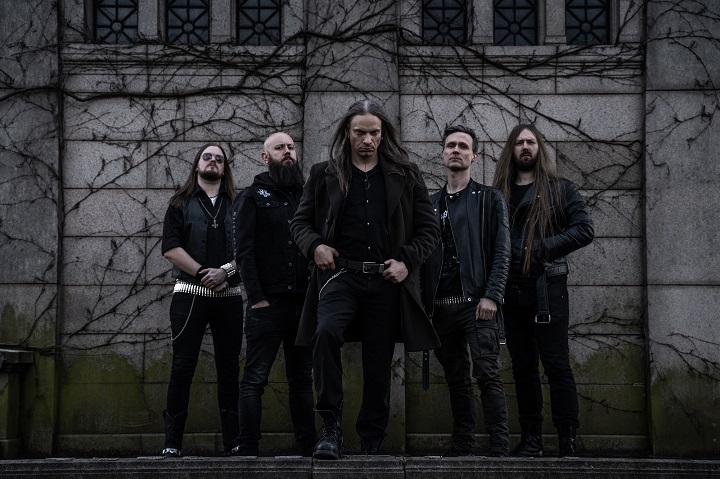 Consummatum Est contains nine tracks of versatile-yet-focused metal music. Moving freely between the borders of death metal, doom metal, and black metal, the band focuses on portaying atmospheric and ethereal sonic landscapes that, together with the lyrics, will summon emotions and profound thoughts to the mind of the listener. Pay extra attention to the esoteric aspects of the lyrics, which perfectly blend with the music and present the different vocal styles – and Luciferian/misanthropic mindset – of singer and lyricist Dr. Häll.

Once called “Sweden’s most underrated metal band” by the editor of Sweden Rock magazine, Grand Harvest show themselves worthy of further attention. The heavy riffs, the soaring melodies, and the sinister vocals on this debut album will convince you of that.

Stemming from numerous previous bands and originating in Malmö, Sweden, early attempts in the form of various collaborations between F.S. (lead guitar), R.M. (drums), and Dr. Häll (vocals) were seeing the light of day, and the band eventually took permanent shape as Grand Harvest around 2016 following the addition of M.G. (guitars – R.I.P 1979-2018) and N.N. (bass guitar). In late 2018, A.L. stepped in to take over guitar duties after M.G.’s passing.

The band recorded a five-track EP in May 2018, although they decided to not release it and instead focus on further refining the material. Work on their debut album started in 2019, along with trying out the material in front of a live audience. This was notably picked up by Martin Carlsson, editor of Sweden Rock magazine (arguably, the biggest metal magazine in Sweden at the time), who mentioned them in a major Swedish podcast as “the most underrated Swedish metal band at the moment.”

Their debut album, Consummatum Est, is set to be released on March 25th. The album is mixed by Tore Stjerna at NBS/Necromorbus and promises to be one of the great metal releases of 2022. They are also heavily pursuing doing more live performances.

Grand Harvest aims to create dark and dismal doom-influenced death metal, with very clear ties to the past but with an additional heavy element and with darker subject matters. It is a true collective effort, with all band members contributing to the songwriting.

Dark and misanthropic death/doom metal with hints of black metal and with epic/atmospheric elements that together lift the music to a versatile and transcendental level, without losing focus. A steady mix of old-school primitivity, ethereal dreamscapes, and esoteric sermons.

The lyrics—stemming from the thoughts and revelations of singer and lyricist Dr. Häll—reflect a deep resentment of the misery and tyranny congenital to sentient Being in general, and humanity in particular. A Luciferian gnosis of Death, cast in the language of mystical eschatology, personal trials, and a peculiar brand of misanthropic empathy, led to a certain lyrical main theme: the blissful end of all things. The spirit and philosophy informing the lyrics permeate the very essence of the music and the perfect vessel to complete the entity that is Grand Harvest—a means to an end, the definitive end.

In the meantime, hear the brand-new track “Fatehammer” HERE at Grand Harvest‘s Bandcamp, where the album can also be preordered. Cover artwork, courtesy of Misanthropic-Art, and tracklisting are as follows: