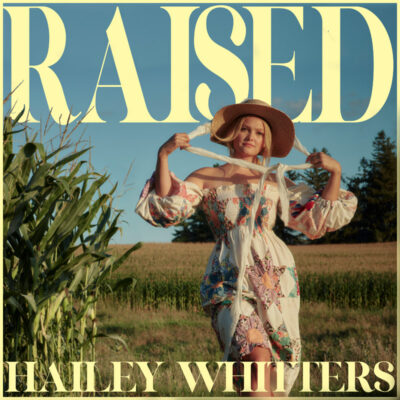 Iowa-born, Nashville-based rising star Hailey Whitters announces her highly anticipated third album RAISED will be released on March 18th 2022 via Pigasus Records/Songs & Daughters/Big Loud Records. Alongside the announcement she releases the official video for the album’s first single ‘Everything She Ain’t‘, directed by Harper Smith. RAISED is now available for pre-order.

“This song sort of fell from the sky one day writing with Bryan Simpson and Ryan Tyndell,” explains Whitters. “Ryan had this cool bouncy guitar part and I shot out the line, ‘I’m everything she is, and everything she ain’t.’ We started spitting out verses and finished it within an hour or so. I love the girl-next-door nature of it and its quirky language. The music video was directed by Harper Smith and was inspired by my old high school ‘Cow Pie High’… the city kids called it that because it was the school that all the country farm kids went to. I actually was the homecoming queen my senior year, so Harper and I thought it would be fun to muse on that for this video. To me, this song is about being the most authentic version of yourself despite what may or may not be popular at the moment. Whether or not you have ‘a Hollywood smile,’ this song is about owning what you bring to the table and being confident in your skin.”

RAISED finds Whitters reconnecting with her Midwestern roots and hometown of Shueyville, IA, while reflecting on family, first kisses, and life amid sprawling cornfields. “It’s been 14 years since I’ve lived in Iowa, but more and more I’ve been going back there mentally, and being pulled to the people and the places that raised me. THE DREAM was about my time and experience in Nashville and RAISED is about taking the road back home to the Heartland. If THE DREAM was my wings, then RAISED is my roots. This feels like the record I was always supposed to make, but it took THE DREAM to put me on the radar of this town and this team. Now that I have it, I’m excited for my fans to connect more personally with who I am.”

The 17-song album was co-produced by Whitters alongside producer Jake Gear, who produced THE DREAM and the subsequent deluxe album LIVING THE DREAM, and was engineered by Logan Matheny. The album also finds Whitters reconnecting with co-writers Brandy Clark, Nicolle Galyon, Hillary Lindsey, and Lori McKenna, and collaborating with American Aquarium for the first time on ‘Middle Of America’.

“This record is where I’m from, this is me. It feels like the prequel to THE DREAM,” explains Whitters. “These are the people and this is the place that made that 17-year-old girl leave everything she’d ever known to pursue a career in Country music, and not give up over the last 14 years.”

Like Whitters herself, RAISED is steeped in the culture of the Midwest. Musically, there are hints of early Alan Jackson, The Chicks, and the king of Heartland Rock, John Mellencamp. But you needn’t have spent your formative years on a farm for RAISED to speak to you.

“RAISED is a celebration of the Heartland, but I think it’s a common story no matter where you’re from. My experience growing up in the middle of the country is very relatable to a lot of people. We’ve all lived in a similar way — the only thing that’s different is the scenery.”

On February 4, Whitters will kick off her debut headline Heartland Tour in her home state of Iowa at Wooly’s in Des Moines, before playing her first European shows as part of C2C Festival, performing on the main stage in London, Glasgow and Dublin – tickets on sale now. Recently, Whitters received her first GRAMMY nomination for Song of the Year for ‘A Beautiful Noise’, which was written by Ruby Amanfu, Brandi Carlile, Brandy Clark, Alicia Keys, Hillary Lindsey, Lori McKenna, Linda Perry and Whitters, and performed by Alicia Keys and Brandi Carlile.

The post Hailey Whitters Returns To Her Roots With New Album ‘Raised’ – Out March 18 appeared first on Six Shooter Country.

The Moon, The Stars And Me