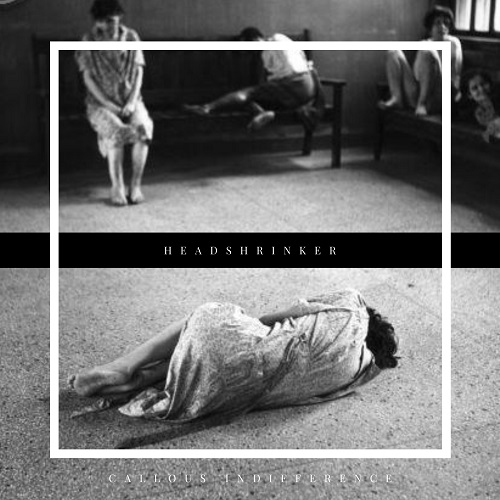 Death metal newcomers Headshrinker have partnered with No Clean Singing to premiere a new single called “Suffocating Tomb”. The final early single to air ahead of the August 27th release of their debut album, Callous Indifference.

You can check out Headshrinker – “Suffocating Tomb” HERE

About The Release
For as long as death metal has been around, gore and physical death have maintained their place as topics used ad nauseam. In recent times, the mind and how we are all destroyed from within continues to gain further ground as a more fertile and relatable subject matter to ground death metal within. It’s in this vulnerable and soul-destroying terrain that Colorado-based death metal newcomers Headshrinker draws from to create their stunning debut album, Callous Indifference. Set for release on August 27th.

Although the Denver-based outfit is a new act, having only started in 2017, three of its four members have spent years honing their craft in the critically praised unconventional Chicago-based death/black metal group Polyptych. With the lineup on Callous Indifference rounded out by the considerable skills of Havok drummer Pete Webber. Together the group’s incredibly gifted members spew out dark and crushing death metal and death/doom filtered through the many eras and styles of extreme metal. First and foremost, old school death metal made anew, in ways comparable to Diskord, Ulthar, and Tomb Mold. Secondly, with the addition of black metal elements sprinkled throughout the music on Callous Indifference, inspired by groups cited by the band such as Voices, Emperor, Shining, and Dark Fortress.

Lastly, and most importantly, Callous Indifference is imbued with a Pyrrhon-esque deconstructed approach that colors all of the album’s songs with a distinctly unorthodox and unhinged quality. The end result makes for an intense and unique album that charts its own course, and in the process fully delivers on its vision of creating suffocating death metal that embodies the steep toll mental health issues extract from each of us.

Headshrinker – Callous Indifference is highly recommended for fans of bands such as Pyrrhon, Ulthar, Tomb Mold, Dismembered, and Diskord. Given their wide range of influences across multiple genres, the group also cites further influences ranging from Akercocke, Triptykon, Celtic Frost, and Chelsea Wolfe among others.

Headshrinker comment on the release of Callous Indifference
“This record symbolizes the large struggle I have faced with mental health over the years and is inspired by persevering through dark times and the will/strength to battle through when the outlook is bleakest. Its themes touch upon self-isolation, emotional disconnect, lack of trust, insomniac struggle, and existential crisis but it all left for the listener to interpret on their own term. We all have our ways of dealing with pain, and this record embraces the pain and finds the expression born out of raw emotion. I also hope it paints mental health in light that shows it to be more than its singular stereotype and stigma. We all struggle and only death is real.”