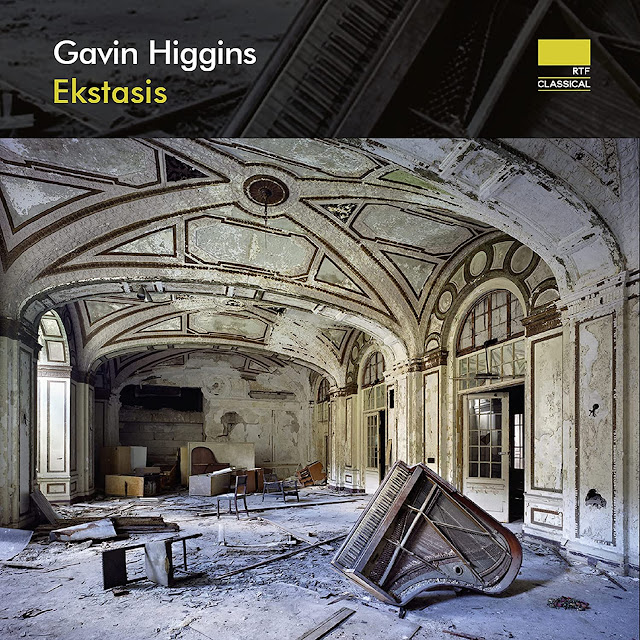 
Reviewed by Robert Hugill on 14 January 2021 Star rating: 5.0 (★★★★★)
From the eerie to the ecstatic, Gavin Higgins’ recent chamber music constantly intrigues and fascinates with its combination of sophisticated instrumental writing and magical textures

Whether by accident or design, none of the pieces on the disc is completely abstract, each takes its inspiration from somewhere or something, each is in a sense a depiction or recreation in music. Both Gursky Landscapes and Ruins of Detroit are based in images that Higgins has seen, the resulting music becoming not so much a depiction of the image as Higgins’ response to it. Seven Welsh Folksongs is more concrete, each of the movements is an arrangement of a folksong, whilst Ekstatis features five movements each of which evokes a different type of ecstasy. The result is a terrific disc of contemporary chamber music, and a programme which certainly has a real life of its own. There is nothing pictorial about Higgins’ music and it is perhaps significant that the two photographers whose work he has been inspired by both produce images that have a significant emotional charge.

Each movement is self-contained, but there are motivic  and harmonic links between each creating a sense of cohesion. With his choice of images, three are outdoor landscapes, whilst the other two are indoor ‘cathedral-esque’ spaces so that with each image there is a sense of man’s place within the environment.

And Higgins use of the quintet is interesting because instead of writing for five equal voices, he creates a concertante work with a solo cello (David Cohen) plus string quartet, so that the cello becomes a distinct voice running throughout the piece. ‘Dolomites, Cable Car’ creates a magical, airy texture with the solo cello dominating the atmospheric writing, we are truly up in the air. ‘Les Mées’ is busy and dynamic with a constant sense of suppressed excitement, something is going to happen; in fact the image is of thousands of solar panels in a pristine alpine landscape. ‘Kamiokande’ is a neutrino observatory deep beneath a mountain in Japan. Here the music is all about textures, pizzicato, arco, glissandi combining to create a vivid feeling of narrative and drama. With ‘Utah’ we are back in the landscape, haunting yet rather disturbing too as the music becomes more intense with a distinct edge to the harmonies, the feeling of the constant oppression of the endless landscape. Finally we are in a cathedral interior, the human images tiny. Here quiet high pitches generate a sense of eerie silence that gets denser and more intense before unwinding again.

The Ruins of Detroit for piano trio (the Fidelio Trio) takes the images of Yves Marchand and Romain Meffre as its starting point, each movement based on an image of the ruined grandeur of abandoned interiors in Detroit – ‘Ballroom, Lee Plaza Hotel’ (the image on the CD cover, see above), ‘Car, Michigan Theatre’, ‘Piano, St Albertus School’. In his notes Higgins describes them as ‘poignant relics of the American dream gone wrong’.

‘Ballroom, Lee Plaza Hotel’ begins with slowly intertwining string lines, a slow waltz creating an eerie texture. Only after a significant time does the piano appear, with spikier material, hesitant at first but it drives the music onto something stronger and more dramatic, driving the movement on so that it erupts into the second, ‘Car, Michigan Theatre’. This is fast and spiky, all pizzicato and jazzy chords with a dazzling glitter to the piano writing, yet it too becomes intense before gradually unwinding, dissipating into the final movement, ‘Piano, St Albertus School’ which features slow sustained strings with flurries of piano figurations, and finally the opening material appears and evaporates.  The Ruins of Detroit is an intriguing and striking work, certainly not obvious when it comes to inspirations for the piano trio, yet idiomatic throughout.

Whilst working on a cantata based on a Welsh folk legend for the Aldeburgh Festival, Higgins started exploring other Welsh folk tunes and the end result was his suite of seven of them arranged for solo violin, here played by Thomas Gould. All seven are rather more intense than folk-ish, closer to Bartok than RVW, and the way Higgins uses the violin’s double stopping brings a vigour and intensity to the music, it is about the sound of the violin. The movements alternate between slow and fast, but remain intense throughout and there is something quite uncompromising about Higgins’ writing for the violin.

Finally we come to Ekstasis for string sextet (the Piatti Quartet with David Cohen and Sara Roberts, so two each of violins, violas and cellos), which was commissioned by the Richard Thomas Foundation who supported the production of the disc. Higgins describes the work thus, “Ekstasis explores the ways in which humans endeavour to attain states of ecstasy, lose control and transcend ‘the self’.” The ways are many and various. ‘Palms rise to the universe’ refers to a Rhianna/Sia song that talks about the use of the drug MDMA. ‘Sweat’ is inspired by a Nan Goldin image of two men making love. ‘We turn to the gods and are torn apart’ is inspired by Bacchic cults with the title coming from Robert Robertson’s recent translation of Euripides’ The Bacchae. ‘Meditation’ us just that, whilst the final movement ‘This he plunged into my heart’ takes us into the fascinatingly intense and personal religious fervour of St Teresa of Avila.

‘Palms rise to the universe’ begins with an intense, dissonant chord yet within this there is all sorts of movement, it is not static. Gradually the music unwinds, we can’t sustain that level of intensity for long, and fragments of melody appear, yet throughout the movement (which lasts a little over five minutes) the powerful intensity keeps returning, and my notes when listening commented ’20 different ways with intense textures’, yet the music never palls, Higgins remains in stunning control of his material. ‘Sweat’ is darker and with more mobile texture, yet it concentrates down to a powerful unison, the idea of two becoming one and through the movement there are strong gestures indeed. The Bacchic cult is all vivid pizzicato, fast, busy and energetic. ‘Meditation’ is naturally sustained with close harmonies and a rather comforting melody that circles round and round, the depth of the music growing. Finally St Teresa and her image of an angel plunging a divine spear into her breast. The music here is quietly sustained, with a sense of long-breathed intensity with sudden rush at the end. Terrific.

The music of the sextet is full of remarkable moments and striking incident. Throughout, Higgins is in terrific control of his forces, using the six strings to create some magical and intriguing moments.

Never miss out on future posts by following us

The blog is free, but I’d be delighted if you were to show your appreciation by buying me a coffee.

Elsewhere on this blog

WHAT’S ON FEBRUARY: BLACK IS THE COLOR OF MY VOICE comes to The Horsecross Theatre Perth on 3rd & 4th February

NEWS: Scottish Ballet will be completing their tour of The Nutcracker in Inverness

WHAT’S ON: NEW STAGE PLAY BASED ON THE CLASSIC CLUEDO BOARD GAME TO TOUR THE UK IN 2022