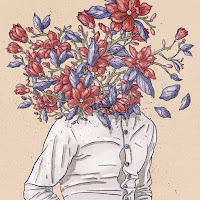 The Shambertans’ debut EP, Wallflower, is an achievement in sonic alchemy. Formed in Cambridge, England in 2019, the band’s sound is an extraordinary diversity of melody and mood, a blend of post-punk pop and modern no-frills rock. These balances are difficult to strike, and most modern rock bands end up producing grocery store music – one of a hundred varieties of the same product.

While the band stands on their own solid ground, the influences are clear. On the title track, “Wallflower,” one can hear the strains of “Happy Hour” by The Housemartins. The pop hooks and the mellifluous tone of lead singer James Malone’s voice bears an uncanny resemblance to Housemartins frontman Paul Heaton. Further on, songs with harder edges, such as “Sun in Your Eyes,” bring to mind The Libertines in their ability to cut searing guitar licks between subtle yet impactful lyrics.
The theme throughout these understated lyrics is one of alienation and the fear of fading into the woodwork. On “Wallflower,” Malone sings,

“No life lives forever, deadmen rise up never, I’m a sleeper without a dream, searching for something.”

“Standing on The Dancefloor” takes us into the mind of the lovelorn, astounded that in a crowded bar he somehow has the woman of his dreams alone to himself.

“’Cuz I want to be you; I need to be. Letting all the liberties fly. I see you. I want to be near you. It’s what everyone wants, and only you can make them cry.”

The band’s power is restrained only by the pop song structure, and one gets the sense that Malone, guitarist Simon Jupp, bassist Sam Hester, and drummer Adam Mansfield are just itching to let loose live. Post lockdown, I’m hopeful that the band will do just that.
All in all, Wallflower is an impressive debut by a band on the brink of a breakout. Like a perfectly mixed cocktail, Shambertans blend influences and stylings to produce a modern, stylish sound that goes down easy and packs a punch. This band is establishing its footing as a force to be reckoned with for years to come.
– Tom Endyke | Guitar & Pen
8.6.1