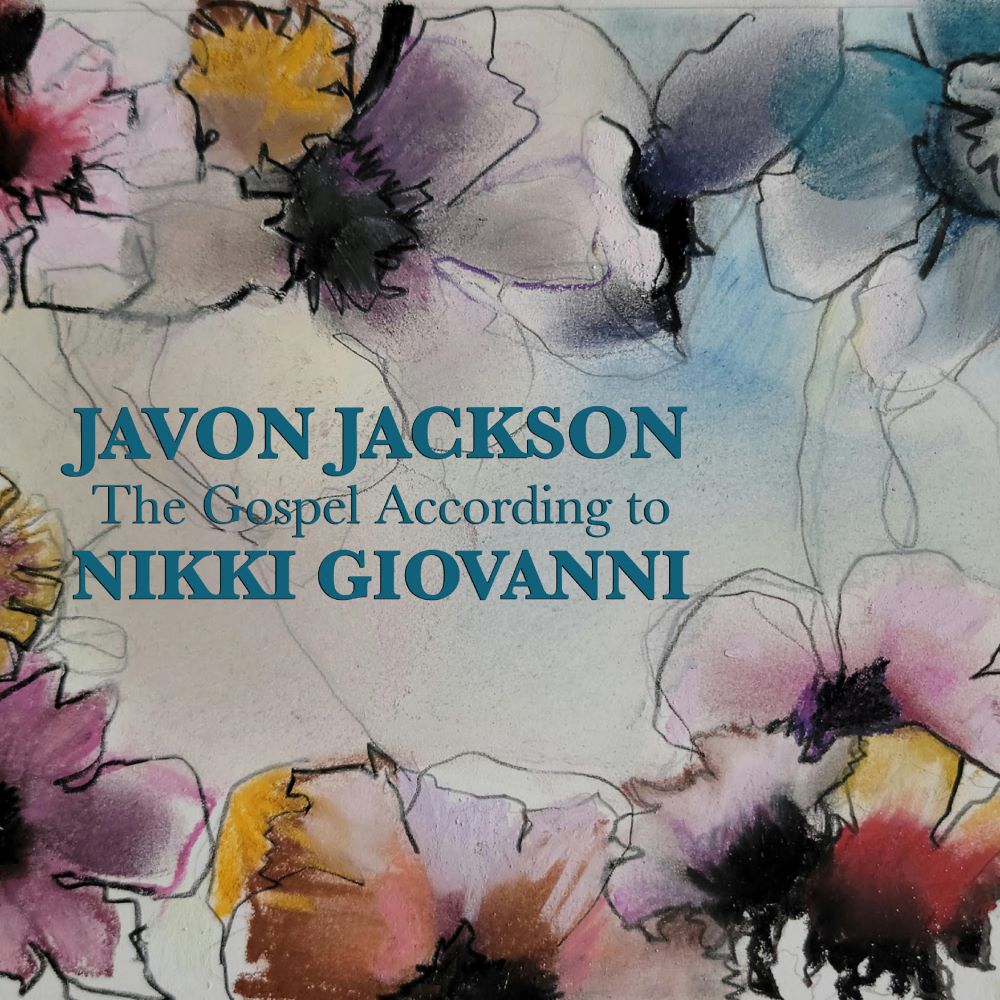 Tenor Saxophonist Javon Jackson Joins Forces with Renowned African American Poet, Activist and Educator in Historic Collaboration
The Gospel According to Nikki Giovanni connects with the ancestral stream while putting a jazzy new perspective on timeless hymns and spirituals
Why would one of poetry’s most revered voices want to curate a jazz saxophonist’s album of gospel hymns and spirituals? “These songs are so important,” says Nikki Giovanni, one of Oprah Winfrey’s 25 “Living Legends” and a Maya Angelou Lifetime Achievement Award winner for 2017. “They comforted people through times of slavery, and during recent years we needed them to comfort us again. But a lot of the students today do not know about the history of these songs, and they should. So I’m out here putting water on the flowers, because they need a drink.”
Giovanni’s historic collaboration with saxophonist-composer and former Jazz Messenger Javon Jackson has yielded The Gospel According to Nikki Giovanni, available February 18, 2022 on his Solid Jackson label. “The spirituals have been around so long,” says the renowned poet, activist and educator, who came to prominence in the 1960s and ’70s as a foundational member of the Black Arts movement following the publication of such early works as 1968’s book of poetry Black Feeling, Black Talk/Black Judgment and 1970’s Re:Creation. “Some spirituals have been updated and stayed around and some have been lost over time,” Giovanni notes “So for me, it’s just helping to keep something going. And I do it because there’s a need.”
Jackson brings his bold-toned, Trane-inspired tenor lines to bear on a series of hymns, spirituals and gospel numbers hand-picked by Giovanni, who was also the first person to receive the Rosa L. Parks Women of Courage Award. And the 78-year-old poet makes a rare vocal appearance on the tender ballad “Night Song,” singing a song identified with her close friend, the late civil rights activist and High Priestess of Soul, Nina Simone. “Nina was a friend of mine, and I knew that one of her favorite songs was ‘Night Song’,” she explains. “And even though I’m not a singer, I told Javon I wanted to sing it because I just wanted Nina to be remembered.” Jackson, who flew to Nikki’s home in Roanoke, Virginia, to record her vocal track on the existing instrumental tracks, says, “I sat beside her when she sang it and by the time she finished that chorus, I was deeply moved. I just love the fragile nature of the way she treated it. It was very emotional.”
Joined by an outstanding crew comprised of pianist Jeremy Manasia, bassist David Williams and drummer McClenty Hunter — the same lineup that appeared on Jackson’s 2018 album For You and his 2020 follow-up, Deja Vu — Jackson interprets gospel staples like “Swing Low, Sweet Chariot,” “Wade in the Water,” “Didn’t My Lord Deliver Daniel” and “Leaning on the Everlasting Arms” with authoritative tenor tones, deep walking bass lines and an organic sense of group swing. “It’s the first time I worked in a collaborative manner,” Jackson says. “The project is personal for me. I come from a lineage of devout Christians, and that has afforded me the chance to connect with that ancestral stream.” 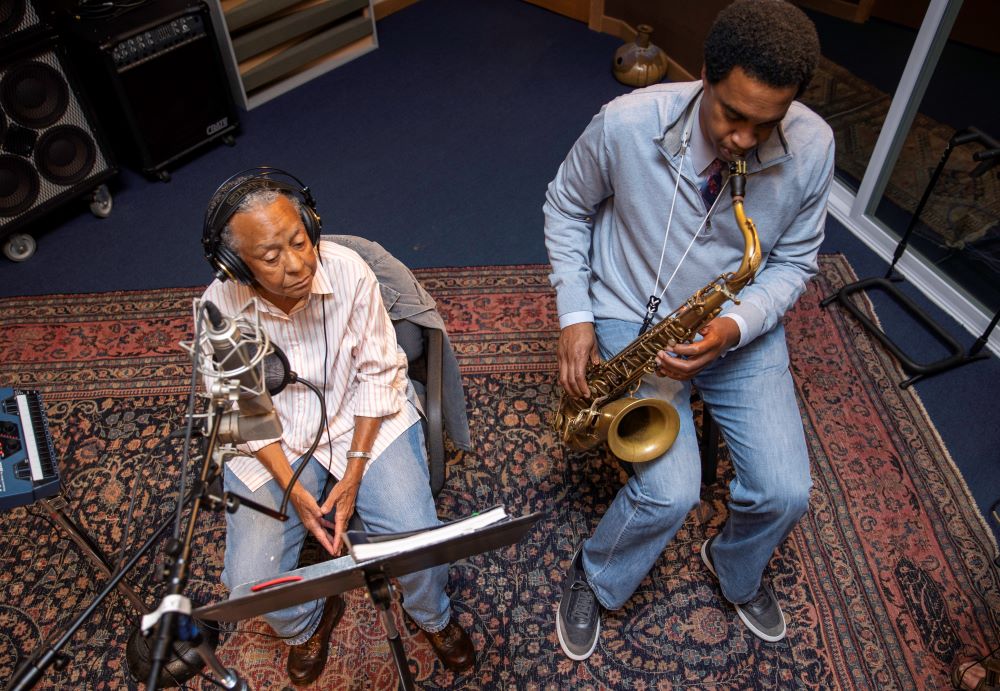 © Shaban_R._Athuman
The Gospel According to Nikki Giovanni came about through a serendipitous meeting between the two principals when Jackson, a faculty member of The Hartt School at the University of Hartford and director of its Jackie McLean Institute of Jazz, invited Giovanni to speak to his students there. As he recalls, “Ever since I’ve been at the University of Hartford, I felt that the school would be well-served to bring great scholars of color and scholars who were freedom fighters and activists, if you will. So I brought in Dr. Cornel West, Sonia Sanchez, Angela Davis and Michael Eric Dyson. Then in February of 2020, I brought Nikki Giovanni.”
The renowned poet’s appearance at the University coincided with her receiving an honorary doctorate there. And as Jackson recalls, “After Nikki spoke to the students, she noticed that the Hank Jones and Charlie Haden CD of hymns and spirituals (1994’s Steal Away) was playing in the auditorium. She said she loved it and wanted to hear more, and just then I was hit with the idea. Two days later, after she returned to her home in Roanoke, I contacted her and said, ‘Would you be willing to pick 10 hymns? And that’ll be my next recording.’ She got back to me in a few days and gave me the 10 selections.”
The collection opens with the driving shuffle “Didn’t My Lord Deliver Daniel,” a spiritual recorded by Paul Robeson in 1937. Jackson delivers the melody in straightforward fashion with golden tenor tones before Manasia “goes to church” on his piano solo. The minor-key “Wade in the Water” is lifted by a mid-tempo swing feel, paced by Williams’ deep walking basslines and Hunter’s steady, syncopated ride-cymbal pulse. After Jackson delivers a robust tenor solo and Manasia follows suit with an earthy piano solo, Christina Greer enters, dropping some wisdom from Giovanni’s poem “A Very Simple Wish.” As Jackson explains, “For this, I reached out to Markeysha Davis, an assistant professor of Africana studies and literature at the University of Hartford. She is really a fan and knows Nikki’s work far better than I do. Nikki’s got 50 years’ worth of poetry, so I didn’t know where to begin. But I sent Markeysha John Coltrane’s ‘Spiritual’ to give her an idea of what we were trying to do, and she came back with that poem.”
The quartet’s rendition of the dirge-like “Sometimes I Feel Like a Motherless Child” carries the somber feeling of Coltrane’s “Equinox,” while their interpretation of “Mary Had a Baby, Yes Lord” recalls Trane’s powerful civil-rights era requiem, “Alabama.” “Leaning on the Everlasting Arms,” one of Giovanni’s favorites from her own Baptist church upbringing, is rendered at a loping beat, conveying a distinctive Southern gospel feel. “A lot of times when I’ve heard this song in church, it’s a little faster, a little more upbeat,” Jackson says. “I wanted to make it slower, where I could really expose the melody a lot more and lay on some of those phrases—so I could be as emotive as possible with the melody, as if I was playing in church with people in the audience.”
“I’ve Been ’Buked,” a spiritual sung by Mahalia Jackson in front of the Lincoln Memorial during the March on Washington on August 28, 1963, where Dr. Martin Luther King also delivered his famous “I Have a Dream” speech, opens with some dramatic unaccompanied arco bass work by Williams before the full band enters with Jackson conveying the melody simply and deliberately. “In a perfect world, I would love to have had David bowing with Paul Robeson singing that melody,” says the leader. “The bow is so beautiful because, to me, it’s close to the human voice in a way.” 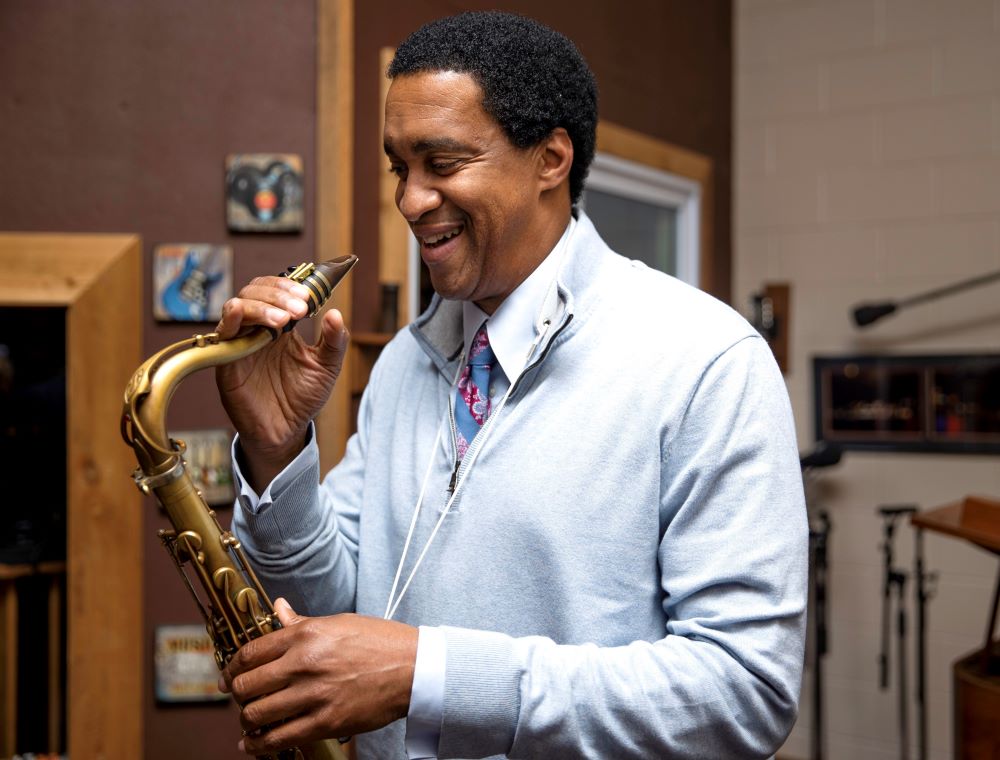 © Shaban_R._Athuman
Jackson and company render the normally somber “Swing Low, Sweet Chariot” as a buoyant calypso. In fact, you can hear the saxophonist directly quoting from Sonny Rollins’ most famous calypso, “St. Thomas,” midway through the song. Bassist Williams, being from Trinidad, is uniquely qualified to provide the requisite bounce on this ebullient calypso rendition of this well-known African American spiritual. “Doing that song this way is a reminder that the departure or the transition doesn’t have to be one of sadness,” says Jackson. “We don’t want it to be where the person or persons listening to the CD become downtrodden. We want it to be celebratory. It’s like what Art Blakey always used to tell us: ‘You cry when they come in, and you rejoice when they go out.’ I never forgot that.”
The most intimate piece of the collection is the gentle hymn “Lord, I Want to Be a Christian,” performed as a rubato duet between Jackson’s tenor sax and Manasia’s piano. The quartet closes on a rousing note with a swinging “I Opened My Mouth to the Lord,” which again features Williams’ deeply resonant bass carrying the melody and Jackson in strong ‘speechifying’ mode on tenor sax. Manasia also turns in an exhilarating piano solo here, and even drummer Hunter gets a solo taste near the end of this triumphant closer.
Captured live at Telefunken Studios in South Windsor, Connecticut, the 10 tunes on The Gospel According to Nikki Giovanni were all done without the use of headphones, another first for Jackson. “I’ve never done a recording before in a studio where I didn’t use headphones, so it felt like performing a gig,” he says. “We never counted off a piece and there were no endings, where I might dictate or give a direction towards an ending. I really wanted to do it just like if you’re in church, where there’s a preacher talking and all of a sudden the choir begins. So each time, whether the bass would start the tune or the piano or myself, there were no count-offs because I wanted to make it as natural as possible.”
“This music is something that people will probably be a little surprised to see coming from me,” Jackson says. But given the state of the world, it could be just in time. Both poet and saxophonist stand on the shoulders of their ancestors on The Gospel According to Nikki Giovanni.
javonjackson.com    nikki-giovanni.com
Apple Music    Amazon