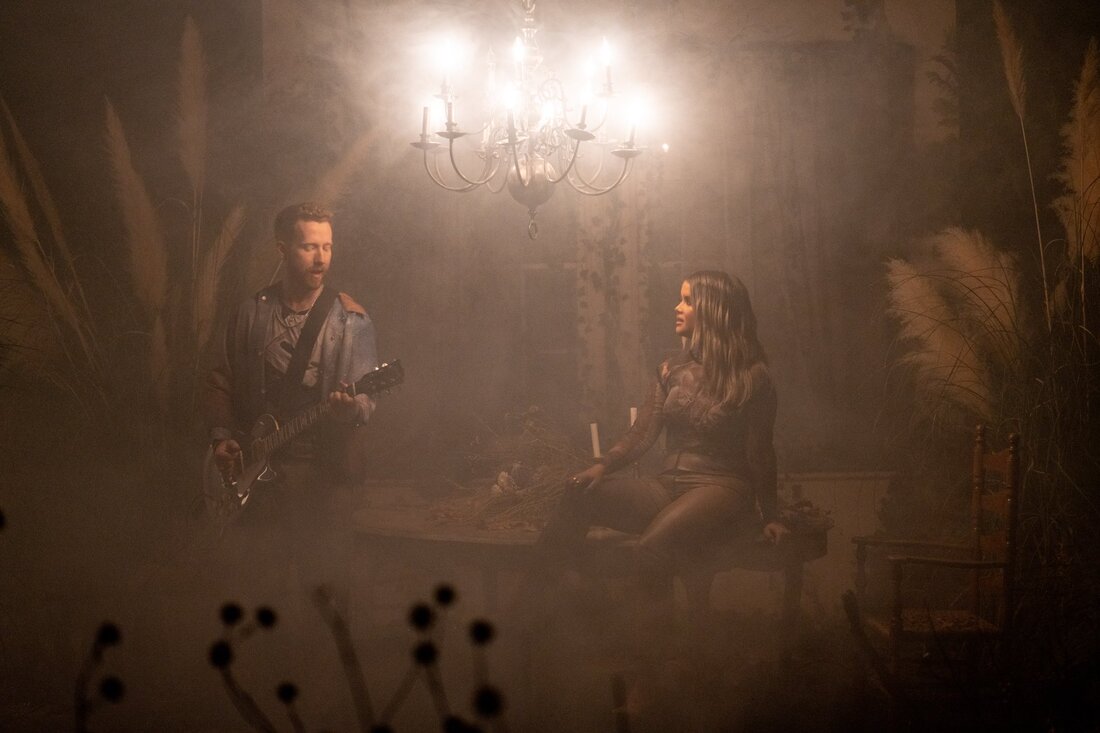 Today JP Saxe and Maren Morris release and premiere the video for their collaboration “Line By Line.” Teasing the release, the two took to Twitter complimenting one another, JP suggesting “we should maybe make one [song] together sometime cuz I’d love that a lot.”

The release was announced earlier this week and the two artists sat down with Zane Lowe on Apple Music to discuss the process and life during COVID.

Read the highlights:
​JP Saxe: I mean, well, first and foremost, I was just beyond excited to get to meet and write with Maren, because I’m such a massive fan. And we have the shared experience of being really in love with other songwriters and being kind of in this every day adventure of trying to summarize what it feels like to love somebody in a song. And often a song can be a really intimate place to fully represent how big love can be. And I think this song is us making our best attempt.

Maren Morris: Very effortless. I mean, at least that was my perspective of the day. I can’t speak for JP or Jimmy Robbins who we wrote it with. But it was our second day writing. We had two days together last summer, JP and I, which is crazy. This is still a very, very new song to even us, the creators of it. But no, it just clicked. And I realized just very instantly once JP that just blurted the line out “immortalizing my sincerity,” I just was like, “Okay, I’m working with someone that loves the turn of a phrase, loves the art of a lyric.” And I was like, “Are you sure you’re not from Nashville?” Because that’s very much what we’re about here. But no, it was so effortless if I could be so bold to say. And I definitely think that us both being in love and in relationships with songwriters, it really felt like something that only we could write, at least this way. And so I love writing songs about songs, but especially a love song about a song.

JP Saxe: Yeah, I mean, I think as songwriters, we have the blessing of a curse in the curse of just really intense introspection at all times. We are able to think ourselves into and out of beautiful things because we’re constantly analyzing the emotional space in our lives. Part of why I relate to this song so much and why I was so excited at the beginning of our session when Marin said, “I’ve been wanting to write a love song for songs,” is because as a weirdo kid growing up in Canada with too many feelings and not very many friends, songs were the first place I really figured out what it meant to have a relationship with myself, to be curious about myself, to look inward and to navigate what it meant to have a dialogue with myself. And to this day, I don’t feel closer to myself anywhere than sitting at an instrument.

Maren Morris: …I’m so fortunate to be able to write with people that I’ve made music with in the past. And then meeting people like JP along the way has been so rewarding for me to just get out of my comfort zone and write with really talented lyricists, with writers. And so, yeah, I’m always on the hunt for peeling the next layer back of what a song is and what it chemically does to us. I feel like we got to explore that in a really deep way with line by line that day in the room. And being married to a songwriter, I definitely know how frustrating it must be for our partners to be like, “Okay, we just got super —— at one another. I’m not going to be able to process this until my write tomorrow. So I’ll talk to you after that.”

With COVID and everything, I canceled my tour for the year. So that was definitely sad. But at the same time, I’ve never had this much time to myself to write and not have an end point or some sort of time lock on it. With my second record, I feel like I had to write that so quickly. And I’m not trying to disparage it by any means. I just think now I’m just so excited to have some space to write. And I have got, I would say, mostly a full record written. And I’m leaving in a couple of weeks to start recording with Greg Kurstin. And I’m bringing my baby with me. I mean, things are very different than they were this the second time around with Rural. I mean, I have a kid now. And he’s perfect. And the silver lining of everything getting canceled tour wise is that we are really getting to have all this time that we wouldn’t have had the same way with Hayes. So, that’s been great. So yeah, just more writing, more recording, more like becoming a better parent. And we’ll get back on the road when it’s safe. But I think this is such a creative time for all creatives. And so I’m just trying to lean into it and not worry about a deadline. There’s a lot of songs coming in because there is no deadline.

Watch the video below and listen here.

HARDY SKYROCKETS AT COUNTRY RADIO WITH “GIVE HEAVEN SOME HELL”

INTERVIEW — Getting In Sync With KDA [MI4L.com]