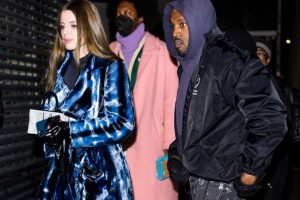 As of recent, Kanye has been vocal about his respect for Future. After West said Future was the most impactful artist of the last decade in his Drink Champs interview, Future brought Ye out as a special guest during his Rolling Loud performance. The two were even spotted together at West’s NYE party in Miami. Now, it looks like they even have some new, unreleased songs together as well.

Julia Fox spoke about the unreleased music between Ye and Future in a new episode of her and Niki Takesh’s podcast Forbidden Fruits. Around the 15 minute mark, Fox began talking about studio sessions with Ye and Future.

“It’s honestly just an honor to be in the presence and to be able to witness history happening,” Fox said. “Even being in the studio with him and Future and listening to the new songs which, by the way, are fucking insane. That’s really cool. I love that and I love music. Music has saved my life on many occasions.”

It would be interesting to see what direction the two artists take their collab in. They haven’t collaborated since Future’s single “I Won” that came out in 2014. Maybe this collab will make its way on to DONDA 2?

However, Ye’s collab with Future is just one of many collab’s Kanye is trying to make happen. In recent weeks, Ye has expressed his wishes to collab with Moneybagg Yo, Antonio Brown, and has been seen in the studio with The Game, Blueface, and A$AP Rocky.

Ye even announced that he and The Game would release a song on Friday. On Thursday, Ye took to Instagram to share the cover art for the song, which is apparently titled “My Life Was Never Eazy.”