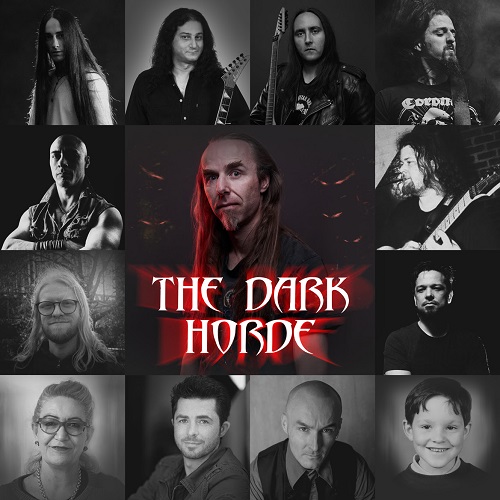 The Dark Horde is Melbourne’s newest collective of internationally recognised musicians, vocalists and actors. Together they bring us ‘Mask‘, the first single from their upcoming concept album ‘The Calling’ due for release in October 2021. Showcasing a powerful cinematic sound, ‘Mask’ brings eighties heavy metal into the modern era, driven by dominating riffs, compelling vocals and the supernatural horror tale that is the Prequel to Brewin’s 2012 novel The Dark Horde. The huge track sets high expectations for the 12 track musical narrative experience to follow.

Concept-creator and lyricist Brewin says of the release “I have assembled some of Australia’s best musicians, singers and voice-actors – collectively known as The Dark Horde – to create The Calling: a heavy metalhorrorconcept albumset in 1989. Mask is the second track from The Calling album and the debut single. Here the main character Henry tells of the horrible burden of knowledge and gives a portent of the horror to come. A captivatingnarrative journey awaits the listener, a spell-binding supernatural tale of torment and terror from which the listener will never be same…“

Describing the album as ‘A Supernatural Horror Story Set To An Eighties Heavy Metal Soundtrack’ The Dark Horde are proving there is more than one way to tell a story. Now with the release of ‘Mask’ and the upcoming album ‘The Calling‘, The Dark Horde are set to take the Australian Heavy Music scene by storm with their unique take on Heavy Metal and Storytelling that is sure to leave a lasting impression!

‘Mask’ is Out Now on all major distribution platforms via lnk.to/TDHMask