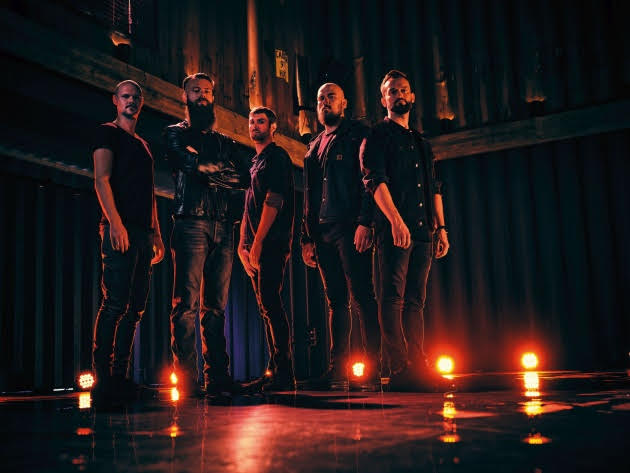 Melodic death metal act CREDIC just recently annnounced the release of the band’s sophomore studio album, entitled Vermillion Oceans, out on April 22nd via Sweden’s powerhouse Black Lion Records. Today, the band from Stuttgart, Germany, follows up with the premiere of a brand new and intense music video for the album’s title track.

CREDIC comments: “VERMILLION OCEANS is the prime example of what CREDIC is about. An interplay between rawness and harmonies, aggression and melodies, catchy hooks and heavy breakdowns. It’s when the root of Melodic Death Metal meets modern Metal Sounds and then again forms a symbiosis with Darksynth. It’s the first single as well as the titletrack for the upcoming album, that will take you on a rush through Gothenburg and Hawkins, Indiana all at once.“

While the title of the band’s upcoming record may sound like a biblical apocalypse, of churning blood-red seas and the end of days, it’s actually a metaphor for galleons of heart’s blood shed. Born on the dramatic coast of Cape Town, the album tells a Shakespearean story of love and woe. Featuring ten brand new tracks, with Vermillion Oceans CREDIC delivers a furious and ferocious, yet emotional metal Iliad. An epic brand of melodic death metal that is, despite upholding the very DNA of the genre, free and bold, charging with vigour and embellished by a monumental aura of longing not unlike the feeling you get when you gaze at the starlit sky in wonder and terror. Imagine a cross between Gothenburg metal and the score to “Stranger Things”, Vermillion Oceans sounds like a massive, zeitgeisty metal album taking a stroll through Hawkins, Indiana. You might wanna call it arcade death metal or not: This is a first, not only in the cosmos of melodic death metal.