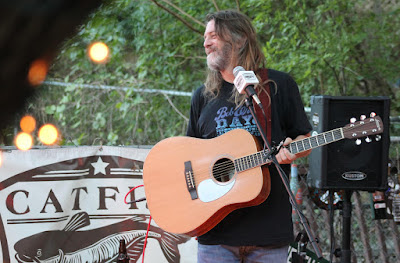 Eight 30 Records is working at putting the finishing touches on a new project honoring one of country music’s greatest living songwriters: If It Weren’t for You: A Tribute to Walt Wilkins.

Wilkins’ work has been likened to the greatest and most timeless of the Texas/American troubadours: Guy Clark, Townes Van Zandt, and Kevin Welch among others. It’s a John Steinbeck comparison that means the most to him, however. “It was in a review of ‘Fire, Honey & Angels,’ in Country Standard Time. That’s a remark to keep close.” Wilkins says. “I have written poetry since I was in grade school, and songs for over twenty years now. It means an awful lot to be mentioned in the same sentence as someone with as much gravity as Steinbeck.. I do try to take my given work in the world seriously, and try not to shy away from the heavy subjects in life: commitment, faith, death.”
The project is being helmed by the same crew that released The Messenger: A Tribute to Ray Wylie Hubbard this past year. While a list of artists hasn’t been confirmed for this project, that project for Hubbard included the likes of The Band of Heathens, Ray Benson, Bobby Bare, Radney Foster, Slaid Cleaves, Rodney Crowell and more.
A fundraising effort is going on to finish off the project that you can read more about HERE.
Jenni Finlay is helming the project there at Eight 30 and says this about the fundraising efforts, “The amounts vary from project to project, but here are the rough amounts for the Walt tribute. The studio and engineer cost about $8000. We are paying all of the performers and artists – which isn’t typical but is RIGHT – and that’s another $10,000. Mixing and mastering will probably be in the $6,000 range. Travel for players and producers from Austin and Nashville and points between probably will be $5,000 and up. Then you have to press CDs, which is anywhere from $2,000-$5,000. After all that, there is back-end money to be spent on art design, packaging, promotion and publicity. Ring up at least another $15,000. Your support will mean everything to us – not to mention Walt! – and seriously will help the cause. Thank you so much in advance!”
The album is hoping to be released in the first half of 2021.