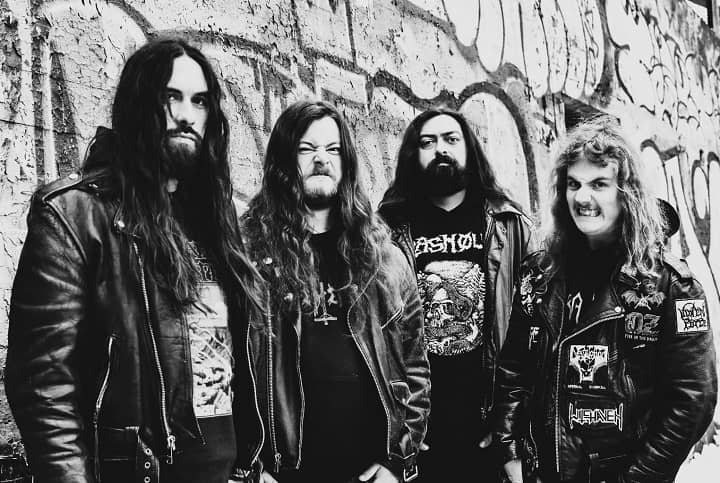 After three years of mayhem and pestilence, Québécois death metal adepts Outre-Tombe return with Abysse Mortifère, their third album of grotesque graveyard anthems, through Temple of Mystery Records. Both LP and CD versions will be released on Hallow’s Eve 2021!

Since their formation in 2010, Quebec City’s Outre-Tombe have fashioned an exquisitely filthy style of death metal. From their first demo in 2012 on to two solid full-lengths, Répurgation (2015) and Nécrovortex (2018), the quartet have shown remarkable patience and poise. Each Outre-Tombe strike is deadlier than the last: pure, disgusting, DEATH METAL is their chosen idiom, and they’ve methodically made their own place within it, with each release serving as a crucial step forward/backward. Indeed, their influences are “backward” in that they hail from the past – namely earliest Grave, Nihilist and Asphyx – but rather than listlessly replicate the late ’80s / early ’90s, Outre-Tombe choose to add to that tradition with a uniquely French-Canadian twist, their mother tongue making their gutsfucking sound that much more guttural.

Now arrives the third sacrilege from Quebec’s barbaric four-piece of eviscerators, bearing the title Abysse Mortifère. Truly, if the not-inconsiderable Nécrovortex seemed “backwards,” then LP#3 is positively ANCIENT: Even more foul than its predecessors, here do Outre-Tombe dive deeply into the most primitive depths of their signature sound. Exhumed from the mephitic depths where it macerated during the plague, Abysse Mortifère malignantly oozes an ever-onward slime of brute-force crush. Primeval howlings, percussive fractures, and bubonic riffs suppurate from this unspeakable audio-torture, the band now fine-tuning that sound toward the likes of classic Autopsy, Dismember, Bolt Thrower, and Entombed. In kind, the production is punishingly raw, sounding not unlike a long-lost demo from the late ’80s; but rather than mask mistakes or superficially emit “atmosphere,” all the finesse and nuance that Outre-Tombe have thus far shown is given heightened clarity. Put another way, one could imagine Abysse Mortifère being released in 1990 on JL America, or you could simply marvel at the songwriting displayed across this nine-song/37-minute tome of death… or would that be TOMB?

And just like its widely acclaimed predecessor, Abysse Mortifère is graced with another luridly vivid cover courtesy of Matt “Putrid” Carr. Now more than ever, Outre-Tombe are for filthy ears and possessed minds!

Become possessed by the first filth of brand-new track “Tombeau de Glace” HERE at Temple of Mystery‘s Bandcamp. Preorder links for all editions follow further below. Aforementioned cover art and tracklisting are as follows: