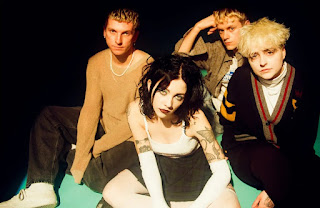 Premiered as Annie Mac’s Hottest Record on BBC Radio 1, it is the third track to be taken from the band’s forthcoming second album ‘Who Am I?’, out on February 12 via Dirty Hit.

Drontwoman Heather Baron-Gracie describes ‘Easy’ as “a song about how love can change your whole entire perspective on life itself. It’s saying ‘being in love with you is so easy, you finally make sense in my life because nothing did before’.”

The accompanying video, directed by James Slater, is a gothic, Tim Burton-inspired wedding built around one of the main lines of the chorus, “you keep the lights on for me”. Baron-Gracie says: “I wore a wedding dress throughout and we shot the video in an old abandoned church. I’m really inspired by the gothic medieval aesthetic and at the time I was thinking of the video I was watching a lot of Tim Burton films whose creativity really inspires me.”

Check it out below.