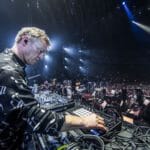 2021 saw the prodigious release of Pete Tong + Friends: Ibiza Classics, primarily featuring English conductor and composer Jules Buckley. Tong now enters the new year with a re-release of one of the compilation’s most notable joint works, “Age of Love,” co-produced by Ukrainian techno duo ARTBAT. The reissue (via Ministry of Sound) arrives with a shorter-length edit of the original record paired with a revitalized “Rave Mix.”

Last year, Tong relished in his excitement regarding the collaborative project, suggesting that it took his Ibiza Classics series “to the next level.” Well, the BBC Radio executive has extended the half-life of the album with “Age of Love (ARTBAT Rave Mix),” which landed alongside a psychedelic new visualizer on January 7.

Having executed a series of “Ibiza Classics Live” concerts with Jules Buckley and The Heritage Orchestra in the final two months of 2021, Tong has also cemented eight new dates for 2022’s year’s end. Browse tickets to the upcoming shows here and watch the “Age of Love (ARTBAT Rave Mix)” official visualizer below.

‘Age Of Love’ our @IbizaClassics_ collaboration with @artbatmusic is now available as a single and on the new #PeteTongAndFriends EP: https://t.co/E12xFJyyBd
Here’s how it sounded when we played it out on the December tour at The O2 Arena, London