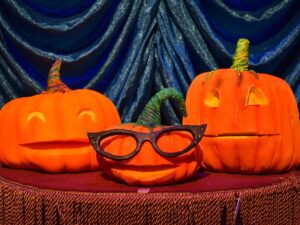 There’s something about a puppet show that makes you feel like a child again in the best way possible. You are right there with them, and your experience and joy are important to the show’s success. Witch Wartsmith’s Halloween Spooktacular, currently playing at The Puppet Co. in Glen Echo, Maryland, in its second annual rendition, is a wonderful example of this. Puppet Co.’s number one rule is “Have fun!” and there are many reasons why one would have fun watching this production. With puppets and set designed by Liz Dapo, a script by Dapo and Kirk Bixby, and direction also by Bixby, the show is perfectly aimed at young audiences and adults interested in puppetry alike.

Witch Wartsmith’s Halloween Spooktacular is a mixture of a telethon and variety show with musical numbers, in which the audience votes on the winner. A different winner is selected among the puppets at each performance. Documentary-style testimonials from the contestants are projected on a screen throughout the stage production, prior to their real-life acts. There are many humorous moments that will make kids laugh, including physical comedy and puns, plus moments of levity that adults will appreciate (particularly the various jokes about sponsorships, like an advertised werewolf spray that goes awry for Witch Wartsmith).

Arm rod puppets Witch Wartsmith (puppeteered and voiced by Kristina Hopkins) and lovable stage manager Benji the Bat (puppeteered and voiced by Danny Pushkin) are engaging hosts to follow throughout the show. They stay on the same page as the audience and teach calls and responses, spending as much time as it takes to ensure kids are fully invested.

Benji is a particular delight, as the right-hand puppet of the Puppet Co.’s house manager during the pre-show speech, creating an environment where the puppets are just as in charge as the audience. His floppy ears occasionally twitch, adding an adorable sense of character as he anxiously tries to make sure the show goes as planned despite shenanigans. One puppet is a zombie that is running loose (played at the performance I saw by understudy Cesar Orellana), which audiences are encouraged to help Witch Wartsmith and Benji find.

The contestants, played by the whole ensemble (Mollie Greenberg, Kristina Hopkins, Momo Nakamura, Danny Pushkin, and understudies Liz Dapo and Cesar Orellana) are a wonderful introduction to the world of puppetry. Some of the best moments involved full ensemble puppet choreography by Kirk Bixby. Whether the puppets are popping in and out of windows decorated with puppet-looking skeletons, or bobbing up and down, there is a spirit behind it that makes you watch every moment with attention as they move on the right beats. The songs in these moments (lyrics and music by Bixby and Jon McLeod) encourage engagement and give “Muppets” vibes in their playfulness. The closing number “1-2-3, Poof!” has audience members yelling out “POOF!” right with the characters.

Full-body marionette puppets held up by strings include Greyson the Mastiff, the Dancing Phalanges, and the Great Boodini. Greyson does a juggling act on a one wheeled-bike, throwing balls up in the air and very narrowly catching them to the audience’s delight. The ghosts glide like jellyfish, bouncing at certain moments and sliding with an elegant grace at others, dancing through the air as a pair without ever colliding. And the Great Boodini, whose costume consists of a sparkly cape, conjures up magic onstage with a realistic sense of combating resistance against his magic as objects emerge. Hand-held puppets Boris and Vince (designed by Ingrid Crepeau) support Witch Wartsmith as hype puppets in announcing acts.

All of these puppets are engaging, but the best acts are the ones with an element of surprise, revealing something that you weren’t expecting. The penultimate act, Harold the Scarecrow, is one of them. His stage fright is so great that it takes him three different tries to perform his act. But when he goes on, it’s a star turn that turns all preconceived notions of the scarecrow inside out. The Jackie O’s (a jack o’lantern girl group) begin as mere pumpkins and are revealed to be bunraku-like puppets who do a show-stopping dance routine to a pumpkin-related parody of “Toxic” by Britney Spears.

The show’s design elements lend it a creepy yet silly vibe. Green lights surround the stage within the stage that the puppets perform on, and a spotlight on the zombie humorously highlights one moment where he pops out from a window on a wall off the stage. Playfully designed stained glass windows, wood, and tombstones match the scenic design with the universe of the puppets. Additional music and sound choices, such as music behind testimonials and a pre-show Halloween playlist, add to the wonderfully chaotic environment.

As a Mainstage Legacy Series production, Witch Wartsmith’s Halloween Spooktacular is a show that will hopefully be a mainstay at Puppet Co for years to come. If you want a sweet show to see this Halloween season, and something spooky-but-not-too-scary for your family to enjoy together, this is the show to see. Here’s to many more years of this annual production, and to more winners like this all around.

​​COVID Safety: All those over the age of 2 are required to mask inside at all times.
*At all special event performances, all patrons over the age of 5 need to show proof of vaccination for admission. For more information, see FAQs here.

Poetry of Paul Laurence Dunbar celebrated at the London Song Festival including songs by Coleridge Taylor, Florence Price, William Grant Still & the premiere of one of my settings