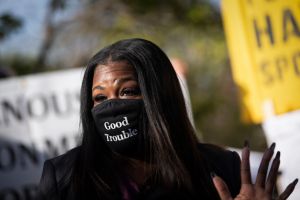 During the hours-long debate in the U.S. House of Representatives regarding a successful second impeachment of President Donald Trump, both sides of the aisle made their stated points. However, freshman Congresswoman Cori Bush received boos after she called signaled Trump as a white supremacist and called out white supremacy overall.

In a debate that was at times tense and most certainly filled with partisan talking points on either side of the aisle, Bush, who represents the 1st District in Missouri, used her time at the podium to call out the so-called insurrectionists and placed the blame at their de facto leader in Trump.

“If we fail to remove a white supremacist president who incited a white supremacist insurrection, it’s communities like Missouri’s 1st District that suffer the most. The 117th Congress must understand that we have a mandate to legislate in defense of black lives,” Bush said before yielding her time.

As she moved away from the podium, a smattering of timid boos rang down in the chamber but grew louder before House Speaker Nancy Pelosi called for some order after the brutish display.

This past Tuesday (Jan. 12), Bush called out her Republican colleagues who refused the honor the rules of a metal detector that was placed at entrances to the U.S. Capitol in the wake of the so-called insurrection.

To my colleagues who won’t go through the metal detectors:

Have you ever had a job before? If you work at McDonald’s and you don’t wear the uniform, you don’t work that day.

If you won’t abide by the rules of this job, go find another one

Bush, who became inspired to join the political world after working as a nurse and organizer during the Ferguson protests, was sworn into office this month after defeating 10-term incumbent Lacy Clay. Bush lost the 2018 primary race against Clay and previously launched a bid to become a U.S. senator in 2016.