shame whack out a ‘Nigel Hitter’ before new album drops 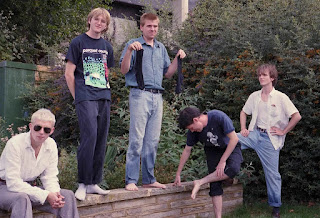 Ahead of their ‘Drunk Tank Pink’ album arriving on Friday, shame pull out a quick last minute single with ‘Nigel Hitter.

It’s the fourth cut from the record, which premiered as Annie Mac’s Hottest Record in the World last week.

The track is released alongside Maxim Kelly’s video which repurposes archival footage from old research centres on the development of children. Using deepfake technology, the babies start to lip sync along with the song, while the band cameo as chin-stroking scientists.

Opening with a heavy, driving bassline, the track moves through a mesh of guitars, stirring hooks and Charlie Steen’s inimitable explosive vocal.

“‘Nigel Hitter’ is one of the vital organs of ‘Drunk Tank Pink’. A necessary pulse. Focused on daily routine, repetition, and how extraordinary any ordinary task seemed to me after coming home from touring. A world of percussion and joy lies within,” say the band.