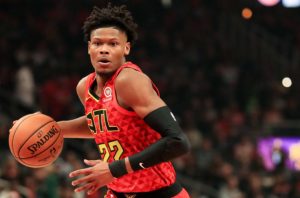 Cam Reddish wanted out of Atlanta and he got his wish. The Atlanta Hawks have sent Reddish and Solomon Hill to the New York Knicks for Kevin Knox and a lottery-protected first-round pick in 2022.

Reddish, the 10th overall pick in the 2019 NBA Draft, will be reuniting with his Duke brother RJ Barrett. Reddish is exactly the player the Knicks could you right now. He is athletic and can defend multiple positions.

Reddish has averaged career highs in points (11.9), field goal percentage (40%), and free throw percentage (90%) this season. He also is shooting 38% on 3-pointers this season which is an improvement from just 27% last season.

Reddish is extension eligible after this season, and the going rate for starting-level 3&D wings is around $18 million a season. New York can try to reach a deal to keep Reddish this summer or let him go to restricted free agency in the summer of 2023 and match any offer then.

The post SOURCE SPORTS: Hawks Send Cam Reddish to The Knicks appeared first on The Source.