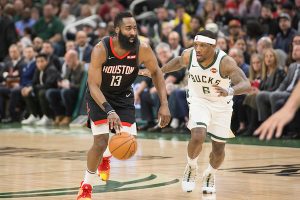 The James Harden era of the Houston Rockets has officially come to a close. The Superstar swingman has been traded to the Brooklyn Nets, forming a new big three with Kevin Durant and Kyrie Irving, if the latter ever returns to the team.

The huge four-team deal brought in the Indiana Packers and Cleveland Cavaliers to complete the deal, ESPN reports.

The Nets will send multiple draft picks, both future firsts and trade swaps, to the Rockets, along with Victor Oladpio coming over from the Indiana Pacers. In addition, the Rockets will receive Dante Exum from the Cavs and Rodion Kurucs from the Nets. The Pacers will take Caris LeVert, while Jarrett Allen and Taurean PRince will head to the Cavs.

The deal will reunite Harden with his Oklahoma City Thunder teammates Kevin Durant and Jeff Green, creating an instant contender in th conference and NBA as a whole.

“I think basketball is about playing together and being the best you can be. So, no matter who you are, it’s about finding connectivity and balance within a team and trying to be greater than the sum of your parts,” Nets coach Steve Nash said of the deal. “So, that doesn’t change no matter what your team looks like, and that’s definitely a goal and a thread of our team from Day One.”

Sam Johnson shares new EP ‘Are We There Yet?’

What Are You Holding Onto? – Pastor Sarah Jakes Roberts