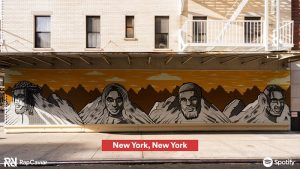 Spotify has collaborated with local visual artists to create bespoke murals in each of the musicians’ hometowns to commemorate their reign. Starting today, passers-by in Toronto, Los Angeles, Raleigh, and New York should be on the lookout for these ‘Mt. Rapmore’ works of art.

Each mural was constructed in the likeness of each legend, hand-painted in areas close to each artist’s heart by Jeks One, Luke Pollard, Jacob Rochester, and Anderson Bluu.

Fans will be asked to scan a Snapcode when they visit the murals, which will question them what “their mood is today,” before shuffling through the artists’ discographies and arriving on an album that suits their mood, which fans can listen to straight on Spotify.

“When the initial Mt Rushmore of 2010s Rap viral moment happened, we knew it had become so big that it deserved a physical installation in the real world,” says Carl Chery, Spotify’s Creative Director & Head of Urban Music, adding “Nicki, Cole, Kendrick, and Drake came of age at the beginning of the 2010s, setting the tone for hip-hop in the streaming era, and now 12-years later they are each legends in their own right and pillars of the genre.  These murals are a celebration of their contributions, and we hope their locations in each artists’ hometown is meaningful to them and their fans.”

You can see the mural below and where you can find them in the rapper’s hometowns below.