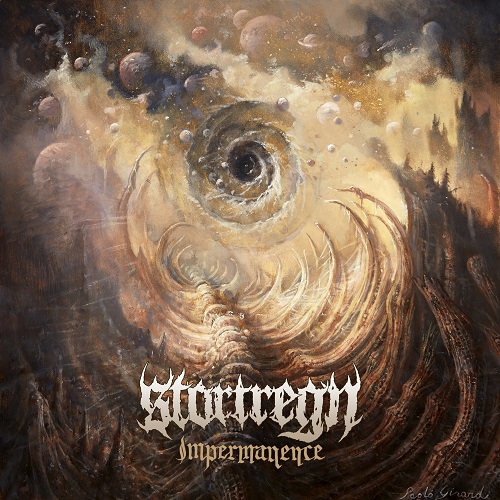 Recent The Artisan Era signees Stortregn are proud to announce the upcoming release of their fifth full-length, Impermanence. Set for release on March 12th via The Artisan Era.

Active since 2006, the Geneva-Switzerland-based act has released four albums and an EP to date which has garnered worldwide praise from music writers and extreme metal fans alike. Their most recent prior album, 2018’s Emptiness Fills the Void, boosted the band’s status and fanbase to new levels. Now the time has come for the group to take their next leap forward, a sentiment Impermanence embodies and embraces with unorthodox yet graceful conviction from start to finish.

Impermanence draws inspiration from a large array of influences including progressive tech-death to 90’s Swedish black metal, old-school heavy metal, and jazz in order to craft a unique style of death metal intertwined with a variety of black metal influences.

Stortregn – Impermanence is highly recommended for fans of bands such as Obscura, Opeth, Inferi, Dissection.

The band partnered with Invisible Oranges today to premiere “Nénie”. The third and final early single to air from the band’s upcoming fifth album, Impermanence.

Invisible Oranges comments on today’s premiere
“On new single “Nénie,” which can be streamed prior to new album Impermanence below, Stortregn plays the “undeniably metal” card, boasting pretty sweet solos, dual guitar harmony, and black metal blasting alike. Though this might not have been on the top of my “to review” pile (I hadn’t casually listened to a melodic death metal album outside of “the classics” for some time at this point), I must admit to being impressed and, dare I say, happy enough to end up checking the whole album out. Stortregn is worth your time if you enjoy being filled with joy and also the intense rage which comes with listening to the right combination of riffs.”

Gabby Barrett’s ‘I Hope’ Is A Catchy Sweet Revenge Song