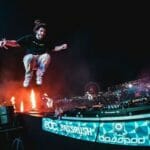 When Subtronics announced that he would be releasing his debut LP Fractals, the producer promised that the record would see him taking his music in a new direction. And while two of the first singles saw him building upon his already-established style as he blended his skills with GRiZ and Zeds Dead for “GRiZTRONICS II (Another Level)” and “Gassed Up” respectively, it was the album’s third single, “Spacetime” featuring NEVVE that saw him truly exploring different sonic territories.

Opening up the record with “O.P.U.S.,” Subtronics makes it clear that Fractals will see him expanding outside of his signature riddim-filled expertise and into some softer melodies. Speaking on how he made the track in just one sitting, Subtronics said in a statement,

“I have no idea what happened. I was at my desk, hitting keys aimlessly while exploring Kontakt libraries and it brought me so much joy. Very meditative. I hope it feels as powerful emotionally for everyone else as it does for me when I hear it. Closing my eyes and turning the intro up full volume always teleports me back to where I was when I started to aimlessly play with chords during the lockdown in 2020.”

While tracks such as “Cabin Fever” carry much of the heavy weight and vibe-riddled sound that he first rose to fame from, others instead pull those sounds to create an entirely new style. To honor his sold-out show at Red Rocks Amphitheatre, Subtronics also created the track “Cyclops Rocks.”

“This one is special to me because it sums up a huge part of my signature sound — belligerently loud, lots of beep boops in a melodic way—and also fits with the rest of the album,” he said in a statement.

Other songs such as “Open Your Mind” both bring forth soothing top lines and wonky beats, creating a unique experience for listeners. Fractals carries enough of Subtronics’ familiar sound that his fans know and love while also diversifying his existing palate. His team-up with Grabbitz, “Into Pieces” highlights that dichotomy with Subtronics slowing his sound down to match up with Grabbitz’s vocals.

“Grabbitz is absolutely unreal,” Subtronics said in a statement.

“I couldn’t believe it when I first heard these vocals… I put a huge emotional effort into writing an intro that fit with the rest of the album and captured the theatrical, cinematic, emotional feeling. Before I got the vocals, it felt incomplete, and once I heard it with them, my jaw dropped. The last drop is super special to me because I’ve been writing a lot of heavy, long note, rip-your-face-off music, but I have never done so at this tempo. I don’t even think I have heard anyone else do so at 85 BPM.”