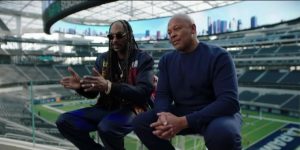 COVID-willing, the Super Bowl will have its most Hip-Hop halftime show yet. Headlined by Dr. Dre, the hip-hop titan is set to bring in a squad of his famous friends in Snoop Dogg, Eminem, Kendrick Lamar, and Mary J. Blige.

With the performance roster set, Covers.com has released the odds that bettors are clamoring over for the halftime show.

Hip-hop and sports fans, like in New York where betting is now legal, are dropping dollars on who will perform first, the total songs to be performed, and more.

Odds that fans can be on include will Snoop Dogg smoke on stage, which carries plus money odds at +255.

Let’s hope those odds can hold. With the Omicron variant surging across the country and California events reaching postponement, a heavy cloud is beginning to loom over the Super Bowl set for SoFi Stadium in Los Angeles. The NFL is already putting contingency plans in place, but what could it mean for the Hip-Hop filled halftime show headlined by Dr. Dre?

According to TMZ, the show headlined by Dr. Dre and set to feature Kendrick Lamar, Mary J. Blige, Eminem, and Snoop Dogg, could cause a loss of millions for Dre and the crew if the performance is canceled. Dr. Dre has Event Cancellation Insurance that would cover if the halftime show would be thrown off, but there is a Communicable Disease Exemption that would not cover the losses Dre would have if the performed is nixed.