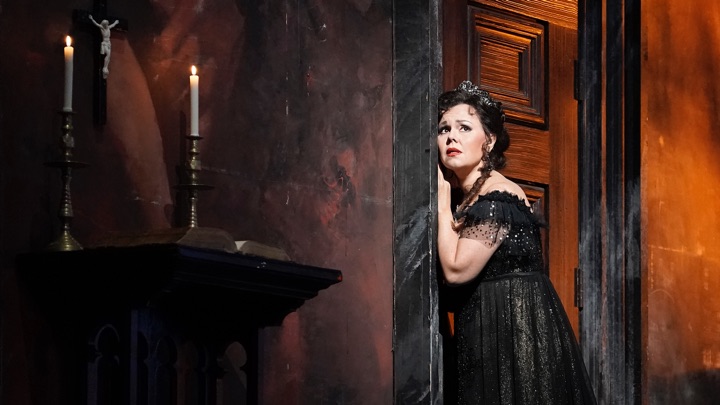 Tosca is a favorite opera heroine of mine; like me, she’s a singer, a Catholic girl who is occasionally tempted to make out in church, and a slightly jealous but loving brunette. She lives for beauty and would prefer not to think about serious things, like Napoleon.

In other words, she’s a normal person who ends up in a very bad situation and has to react, and she reacts like a singer. Even at her death, she has a flair for the dramatic: “Scarpia, avanti a Dio!” is, frankly, a perfect last line.

The production doesn’t reinvent the wheel, though it’s stylish enough, a bit like a more streamlined Zeffirelli.  The sets span various visual levels: the 3D gilt and overstuffed glitz of the cathedral in the first act yields slowly to severe sparseness, almost flatness, at the Castel Sant’Angelo in the third act.

The perspectives are never quite right though, due largely to McVicar’s mystifying stage-left rake, which is just…weird? Why is it raked that high? Why is it raked to the side, when the whole point of a rake is so that we see what’s happening upstage (where basically no blocking happens anyway)?

It works well in Scarpia’s office, as a way to emphasize his crookedness, but the other locations—especially in the third act—felt like we were watching Tosca during the sinking of the Titanic. It knocks the whole show off kilter and undermines McVicar’s other, more striking visual choices, like the screaming women on Scarpia’s office walls.

In the title role, Aleksandra Kurzak was dramatically well-cast as Tosca, but there were occasional vocal bumps. She committed utterly to Tosca’s dark side, that emphasis on chest register that makes the role difficult, to great effect.

But the earthiness and presence that infused her chest register throughout had the sad drawback of weighing down her the high notes, which, while always in tune, didn’t always achieve quite enough spin to capture Tosca’s angelic side. Her “Vissi d’arte” was tragic and elegant, however, displaying Kurzak’s skill with a tender pianissimo.

As our heroine, she was hard to look away from: first of all, she looked beautiful (that sparkly black dress!), but more importantly, she made Tosca’s Act I jealousy feel sympathetic instead of screechy (let’s be honest, if my painter boyfriend painted a hot blonde instead of me, I too would lose it— only an early death would prevent a fuckboy like Cavaradossi from cheating on her eventually), and revealed a coolness in her treatment of Scarpia’s corpse that showed Tosca has nerves of steel.

Tosca is a pretty bad bitch, all things considered, and Kurzak kept her wits very much about her.

Michael Fabiano, after a bit of an unwieldy start in Act I (all depth, no squillo or vice versa), improved as the night progresses. Fabiano debuted the role only last year, and to me it sounds like there are still a few growing pains as he settles into it.

He delivered a truly heroic “Vittoria” B-flat after the announcement of Napoleon’s victory, though, finding the balance between light and dark in his voice and appearing to turn himself basically inside-out in to do so (My date audibly said “whoa!”)

By “Elucevan le stelle,” he’d taken a firmer hold of the reins, dramatically and vocally, and in great Puccini tenor style, worked the whole floor to earn his “bravos.”

Luca Salsi, in the role of “Grossest Man in Opera” (Scarpia), was, well, gross and scary in the best way, wielding his power physical presence and huge hands as weapons over the smaller Kurzak, and singing with a metallic gleam to his robust baritone. Patrick Carfizzi as the Sacristan was utterly delightful, bringing the physical comedy in a big way, and enlivening the entire first act with wit.

Tosca is a classic for a reason, and the Met offers a capable production of it.