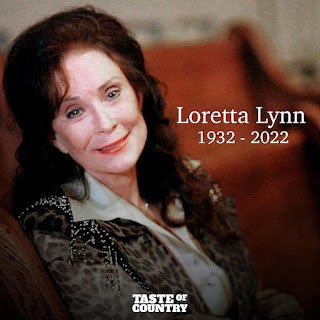 Country Music Hall of Fame member and legendary country music pioneer Loretta Lynn passed away on October 4 at her home in Hurricane Mills, TN at the age of 90. When the news was announced, you could almost hear a collective gasp and sigh of sadness. There was just something so special about this woman, her attitude, her determination and her influence on a genre, its artists and fans. It’s something so unique that will never go away yet something we’ll never truly have again. It’s so obvious how loved she was by her peers. Check out some of the nice things they had to say:
England just recently lost their Queen, and today we have lost ours. It’s a very sad day for the music industry. Loretta Lynn has gone on to her heavenly home. She did more for women in Country Music than anyone. She opened up all the doors. Her songwriting was cutting edge, and she was never afraid to tell the truth. She loved her family and wrote songs about her eastern Kentucky upbringing, but her unforgettable voice and beautiful smile is what I’ll remember most about Loretta. She was an original, one of a kind.”
– Ricky Skaggs
“What a sweet lady and an authentic country singer. She gave a voice to millions of women who would have not otherwise had one. Loretta, we miss you already.”
– Ray Stevens
“When my old friend, the late, great football coach Bum Phillips was asked if Earl Campbell was in a class by himself, Bum replied, ‘Well, if he aint in a class by himself it for durn shor don’t take long to check roll.’ Well, that’s the way I feel about Miss Loretta. Rest in peace, sweetheart. If anybody deserves it, it’s you. I miss you already.”
– Larry Gatlin
“Isn’t it funny when you’re SO famous you only need one name for people to know who you’re talking about? Loretta. One of the incomparable archangels of country music, her name evoked deep truths with simplicity, genius distilled. Her voice was big enough to ring down any holler and carried around the world. She inspired generations of artists, was loved by the world and honored by her children. She lives on in her music and our memories.”
– Pam Tillis
“Today in the life of country music, this is one of its greatest losses. Loretta Lynn, the Coal Miner’s Daughter, was the actual Rual of country music. She spoke the trueness of a song and wrote better than anyone I’d ever heard. She will truly be missed. She was one of the strongest beating parts of the heart of country music.”
– Marty Raybon / Shenandoah
“My heart sank when I heard of Ms. Loretta’s passing. I don’t know that I’ve ever met a sweeter soul. She was so kind to my family and we all loved her beyond words. Her gift was raw and real, and no one will ever match her. She was genuine in every sense of the word. The angels will be in awe of her voice. We are all saddened by the news and praying for the family. This is a great loss to the music community and she will be missed in a big way.”
-Darryl Worley
“Loretta was an icon, both for what’s just and right, and what’s pure, in country music and life. She will be missed and her impact felt for generations.”
– Aaron Lewis
“Country Music will never be the same without our beloved Loretta Lynn. I’m so grateful that I got to know her and call her my friend. When she and Conway recorded one of my songs, it was the thrill of a lifetime. Loretta lived a life of pure, raw honesty and it came through in all of her great songs which was a beautiful gift she gave to all of us and one that will live on forever. My heart and prayers are with Loretta’s family at this time of deep loss. Rest in peace, Loretta. We love you.”
– Deborah Allen
“Loretta was a true original. Loved her voice, especially on her gospel records. On behalf of ALABAMA, I’d like to say the world has lost a treasure. She will be missed.”
-Randy Owen / ALABAMA
“She was one of the greatest music and entertainment legends ever! She was so sweet and so smart! I will always be indebted to her for her inspiration and encouragement. My love and prayers are with her family.”
– John Anderson
“Loretta always sent me notes of encouragement. She was proud of our Kentucky heritage. She once told me, ‘We were common and that’s what made us special.’ Loretta understood. The real deal! She understood the grass roots of all musical styles. She was not only the ‘Queen of Country Music’ but also the ‘Queen of Down to Earth.'”
-Richard Young / The Kentucky Headhunters


“Loretta Lynn started the trail! She was the original trailblazer and will forever be an amazing rags to riches story. However, she will always be a first class lady who always treated everyone with honor and dignity, me included. Rest high sweet friend.”

-Tim Rushlow / The Frontmen
“My roots in country music run deep because of may love an admiration for ‘Ms Loretta.’ She was there in the ’80s, when I arrived in Nashville, to encourage me and allow me to open for her on tour… and, she was there to open for me, in Aurora, IL, in 2013, which unknowingly was my last public concert before my stroke. The years in between are each gifts wrapped in respect, admiration, awe and love — and we shopped for lots of dresses through those years!

Whenever I heard ‘my Randy,’ I knew Loretta was near and her kind, sweet kisses left lipstick memories on my forehead and both cheeks. I wish I could have bottled those kisses and saved them for a day like today, when I learned of her passing. An emptiness came over me as I reflected on the magnitude of Ms Loretta’s presence—in the heart and soul of country music, and the entire world–and the void now created. If your path ever crossed with hers, you immediately felt her magic. Loretta and Doolittle ‘Doo’ represented a legacy marriage with six beautiful children as proof… and, a lot of us that Ms. Loretta took under her wing. I thank God that my career overlapped with The Queen’s—it’s an honor and a privilege.

After 90 years of teaching us how to live and love here on earth, we sing her home to heaven, with grateful hearts. Our thoughts and prayers follow the precious Lynn family down this road of loss and transition—thank you for sharing Ms Loretta with us. We will never have another Loretta Lynn…this world isn’t good enough for two of her.”

– Randy Travis
“I am so sorry to hear of the passing of Loretta Lynn. I have always been a huge fan of her music and was so fortunate to get the opportunity to sing a duet with her on a TV special. That was a dream come true for me. The world has lost a legend and a beautiful person. Prayers to her family, friends and fans.”
– Aaron Tippin
“I’ve known Loretta Lynn for many, many years. Watched her hit the scene in Nashville in 1960 and have always been a fan of her non-apologetic attitude and country sound. I was hoping to see her and visit at the Country Music Hall of Fame inductions coming up… God Bless her family and while we will miss her here on Earth, there’s no doubt in my mind she’s joined that heavenly choir.”
– Jerry Lee Lewis
“I am very saddened today to learn of Loretta Lynn’s passing. Though she was thankfully on this Earth for a lengthy life, nonetheless, it is difficult to hear that we have lost yet another All Time Great. Her timeless songs, her unmistakable voice, and her amazing, legendary story will forever be embedded on the history of Country Music, which she greatly helped to establish and solidify to the world. We don’t have many of them left. Let us all celebrate the life and memories of a Coal Miner’s Daughter. Rest in Peace, Loretta.”
– Collin Raye
“Being a friend and knowing Loretta for many, many years, I am heartbroken. We will all miss her. God Bless her.”
– Sammy Kershaw
“Loretta Lynn, no doubt, was country music royalty. The absolute queen. But, to me, she was my bestest girl!”
– Billy Dean
Everyone knows her story, you’ve seen it in the movie “Coal Miner’s Daughter”, you’ve heard it in her many songs but she lived it in vivid color. She wasn’t scared to sing and write about subjects that were part of who she was, some of those subjects that would make an industry think twice about whether such song content should be released, but they took a chance, released them and we listened and we loved those songs and all these years later, we still listen and we still love them. She told us about her hardships, her accomplishments, her family, her relationship troubles, the loves of her life and her love OF life. No one told a story more honestly and in a more entertaining way than “Loretty” did. She just put it all out there. She was one of the strongest women to ever put a pen to paper, a voice to a recording and step on a stage. She could give a rat’s ass if you liked her, but by God you were gonna listen. She was proud of who she was, what she went through and where she was going. She always knew where she was going and didn’t let anyone get in her way or stop her. She stood up for women in a time where women were finding it hard to be represented in a primarily male industry. She was determined to be taken seriously and damn if she wasn’t taken seriously. It was that simple, yet not so simple determination, kind heart, sense of humor and pride that gave her the opportunity to represent a a grateful audience and oh boy did she shine. When you were looking at Loretta, you WERE looking at country.  When you listen to Loretta, you ARE listening to country. Loretta was authenticity at it’s best and truth at it’s most honest.
Thank you Loretta for simply being you. We will miss you tremendously and will forever be thankful that you were a voice that spoke louder than most. Your voice may be silent but your impression and impact will continue to speak loudly for years to come. I hope somehow that your passing reminds the artists that you leave to carry on how special country music is. I hope it brings us back to what matters and back to music being relatable to everyone, not just certain demographics. I hope it brings us back to a common ground of respect and tradition for the foundation so many artists have fought to build. I hope you are up there smiling and that you realize the enormous legacy you have left us down here.
Rest now, your work here is done.

Carrie Underwood Is Returning to Vegas!