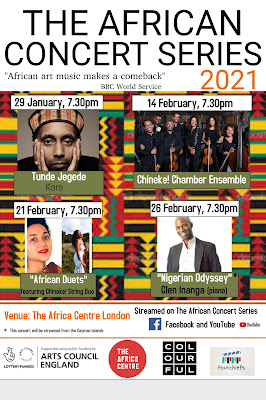 Following the success of the first ever African Concert series in 2019, Artistic Director,
Rebeca Omordia is delighted to announce a stunning new series for 2021. The first part of
this will take place in January and February next year at the Africa Centre in London SE1,
with a follow up series following straight after at The October Gallery in WC1, details of
which will be announced later. The Series is funded by the Arts Council England National
Lottery Project Grants, with The Africa Centre as a cultural partner and media partners,
Fourchiefs Media and Colourful Radio that will feature interviews with the artists on their
radio channel.
Announcing the new season, Omordia said “The idea originated from the encouragement of
Julian Lloyd Webber, when we were duo partners a number of years ago. So I am thrilled that
he has agreed to become our patron.”
Speaking, Lloyd Webber stated: “I am delighted to become a Patron of the wonderful African
Concert Series. It’s a great initiative, which deserves to go from strength to strength and I
look forward to hearing more fantastic music and performances.”
The first concert on January 29th 2021 will be a solo recital by the legendary Tunde Jegede,
world-renowned virtuoso player of the West African lute-related, stringed instrument, the
Kora, performing his own compositions. Rooted in dual cultural legacies, his music is steeped
in both Western and African heritage. The second concert on February 14th, will feature the
much acclaimed Chineke! – their Chamber Ensemble, performing works by Black composers
Samuel Coleridge Perkinson, Florence Price and Errollyn Wallen. On February 21st , the
series features “African Duets” – with Chineke! String duo (with Sarah Daramy-Williams,
violin and Natalia Senior-Brown, viola) and Julian Gil Rodriguez & Alix Lagasse on violins
performing African traditional songs arranged for strings. The final concert in this group will
be on February 26th entitled “Nigerian Odyssey” with the great pioneer of Nigerian classical
music, Nigerian pianist Glen Inanga streamed from the Cayman Islands.
Rebeca Omordia, is a prize-winning classical pianist, who is herself of dual nationality with a
Nigerian father and Romanian mother and her wish with these concerts is to reflect the depth
and diversity of African classical music. She is proud that the 2020 series, streamed online
during Lockdown from all over the world, reached an international audience featured on BBC
World News TV, using the opportunity to bring their own contribution to the Black Lives
Matter Movement. The 2021 series follows suit, being also in the concert hall and online.
The concerts will be streamed on the African Concert Series Facebook and YouTube pages.
https://www.facebook.com/africanconcertseries
Press release by Antony Barlow, Arts Publicity

My collection of 500+ deep house. Night drives are highly recommended