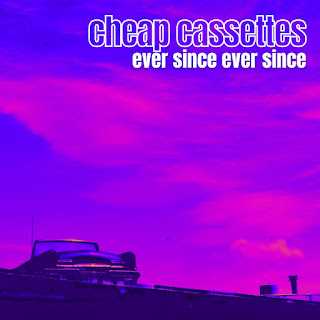 I’m starting to suspect that The Cheap Cassettes have been ingesting performance-enhancing substances in recent years. The Seattle power pop trio (with Boston roots) is currently over a decade into its existence and making by far its best music to date. The run of greatness that began with the “Kiss The Ass of My Heart” and “See Her In Action” singles continues today with the release of the brilliant new album Ever Since Ever Since on Rum Bar Records. I liked the band’s debut album All Anxious, All The Time so much that I reviewed it twice. But Ever Since Ever Since makes All Anxious, All The Time sound like a demo tape!

The first thing that struck me about Ever Since Ever Since is that it’s a true album. All of the songs would be great in isolation, but clearly they were meant to be heard together in the band’s chosen sequence. The flow of this album brings to mind mid-period Replacements, and that can never be a bad thing! The songs (mixed and mastered by Kurt Bloch) pack a serious punch but still leave themselves plenty of room to breathe (six of the 11 tracks run longer than four minutes). The album certainly has its share of should-be radio hits (“She Ain’t Nothing Like You” is an actual radio hit, now in rotation on Little Steven’s Coolest Songs In The World!). But complementing the more instantly-catchy pop songs are some absolutely fantastic deep cuts. This album highlights Charles’s maturity as a songwriter without veering from what The Cheap Cassettes do best: great American rock and roll with big hooks. In my book, the tearjerker rocker “Red Line Blue” is one of the best songs that Charles has ever written. “Endless Summer Ends” just keeps growing on me and growing on me with no end in sight to my amazement. “Cold Sunday” is like Charles’s own “Here Comes A Regular”.

I’m pretty sure you could ask 11 Cheap Cassettes fans to name their favorite song off of Ever Since Ever Since and receive 11 different responses. I’m struggling to identify a single lackluster track. I might peg “She Ain’t Nothing Like You”, “Malnutrition”, and “How I Got What I Wanted” as the obvious “hits”. But there are gems to be found all the way through the album. “Your I’s Are Too Close Together” is a better-than-the-original cover of The Elevators’ 1980 cult classic single. Kevin’s “Wishing The Sun Away” instantly transports me to the early ’90s heyday of Pacific Northwest alternative power pop. The jangly “There Goes That Girl” could almost be a Smithereens song. Ever Since Ever Since is one of the finest examples I’ve heard of what “mature” power pop ought to be. Hooky choruses and memorable melodies abound, but there’s a soulfulness and emotional depth to these songs that is quite rare for this genre of music. Decades ago, Charles told me that he aspired to have a band comparable to The Plimsouls. Well, my friend, I’d say you’ve done it!

Clearly it’s too early to start making album of the year proclamations (especially considering that Malibu Lou will be dropping another bomb in two weeks!). But Ever Since Ever Since sure does set a high bar for the rest of 2022. CD and digital release today. Vinyl is coming later this year!

PUP Announces A New Full-Length With A Single/Video