The Matt Gordy Jazz Tonite Sextet | “Be With Me” 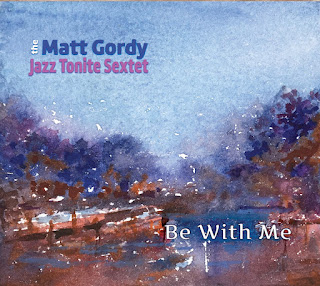 Matt Gordy has travelled down a long and winding road to become one of the first-call jazz drummers in Los Angeles, and now, after a successful, 40-year career, he is releasing second CD as a leader, Be With Me. The album is a showcase for Gordy’s considerable talents as a drummer, arranger, and composer. Be With Me comprises six standards and four compositions by Gordy, who also arranged the album. The album opens with Topsy,” written by Eddie Durham and made famous by Count Basie and Benny Goodman. Gordy’s arrangement was inspired by Oscar Peterson’s version of the tune that appeared on his Oscar Peterson Plays Count Basie recording. Gordy dedicates “You and the Night and the Music” to the late pianist Mulgrew Miller. The tune opens with a solo bass playing the verse followed by a brief solo on the drums and then followed by the horns playing in unison before each soloist gets their turn to improvise. “Camouflage,” one of Gordy’s originals, has a swing/funk groove. “Spring Ahead,” which Gordy dedicates to Chick Corea, is a contrafact based on the late pianist’s classic composition “Spain.” Gordy wrote “Chloe” for his granddaughter’s 10th birthday.

Gordy worked with Joni Mitchell in Boston on her Both Sides Now tour in 2001, and he composed the title track, “Be With Me,” based on the chord changes to “A Case of You” from Mitchell’s Blue album. The song features vocalist Sherry Williams singing lyrics written by Gordy’s good friend Gregg Arthur. Gordy dedicates Mal Waldron’s “Soul Eyes” to McCoy Tyner. It was inspired by Tyner’s version on John Coltrane’s 1962 release, Coltrane. Gordy studied piano with Boston educator Charlie Banacos. Gordy used techniques that Banacos taught him on “My Shining Hour.” Oscar Peterson’s “Wheatland” is from his Canadiana Suite. Gordy re-imagines Peterson’s solo as short fragments that became a shout chorus for the horns. Gordy closes the album with the pop classic “Sunny,” written in 1963. The song again features vocalist Williams, whose performance on the tune Gordy says, “sounds like Sade meets Aretha.” Matt Gordy is one of the finest drummers in the country. He has honed his skills by playing across genres in some of the highest profile, most technically and artistically demanding venues and settings in the U.S. and around the world. Joined by his stellar musical compatriots, Be With Me is an exciting presentation of jazz playing and arranging at its best.

Quentin Angus | “The State Of Things”

Vanstone – Can You Feel It