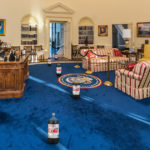 “It was the damnedest thing,” said a member of the Secret Service who wished not to disclose their identity. “I was on my way to the West Wing this morning with the President’s strawberry Pop-Tart, we hide his cholesterol pills in there like a dog with cheese, when I saw this trail of bottles leading out of the Oval Office and down the White House steps. Each bottles was spaced maybe three feet from the next one and as I approached, I saw they were sodas. Strange, sure, but the President’s love of Diet Coke isn’t a big secret. Just then, I heard one open and, rounding the corner, I saw President Trump gulping down the contents in a matter of seconds before moving on to the next one.”

Onlookers were reportedly shocked as they watched Trump drink bottle after bottle of soda, finishing each with a belch and loud “ahhh” sound before repeating the process. By noon, the President had made his way out of the White House, through the Rose Garden, and was well on his way downtown, having left 1600 Pennsylvania Avenue behind completely.

“I can’t believe this actually worked,” Speaker of the House Nancy Pelosi was overheard telling Senate Minority Leader Chuck Schumer as the two enjoyed a cigarette break behind the Capitol building. “This is so much easier than impeachment proceedings would’ve been. Even if we had the votes, I don’t think we could have done it nearly as quickly as the bottles.”

Pelosi then went on to describe to Schumer how Democrats in the House of Representatives had worked together to coordinate a trip to Costco in order to buy the massive quantity of sodas needed and their joint effort in laying out the miles long trail to ensure President Trump’s refusal to leave office would not be an obstacle for incoming President Joe Biden. President-elect Biden declined to comment on any involvement in the scheme but did offer a coy wink when approached by reporters.

At press time, President Trump was seen nearing the end of the soda trail, not seeming to notice that he had entered a jail cell with the door ajar as authorities quietly closed it behind him.

The post Trail of Diet Cokes Set Up to Ensure Smooth Transition of Power appeared first on The Hard Times.

The Anchoress – ‘The Art of Losing’