One sure thing you can count on with an opera production by Dmitri Tcherniakov is that it’s never going to be short of talking points and in some cases (Dialogues des Carmélites) downright controversy. Tcherniakov is still the only opera director I know to have had one of his works actually banned by the courts on the objection of the estate of the work’s original author for subverting the true intentions of the work. You will definitely question whether he is true to the spirit of Romanticism in his setting of Weber’s Der Freischütz in the executive room of the owner of a large corporation.

Furthermore, rather than opening the opera with a traditional shooting contest Tcherniakov has the competitors being urged to train a gun on and take down an unsuspecting member of the public from a window vantage point high on the office block of businessman Lord Kuno. Sure, you expect a modern director to find a new way to express the intentions of an old fashioned opera (albeit one of the most important in the history of German opera) but does this really conform to the original intentions and meaning of the original? Is Tcherniakov not again just seeking to be controversial by overturning and subverting a reactionary agenda? 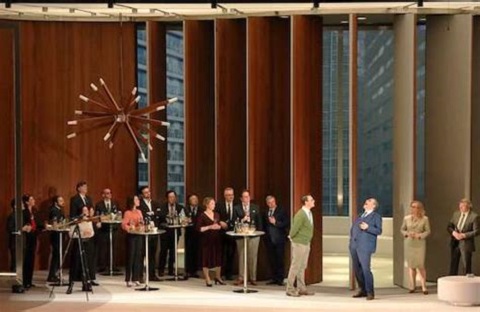 For Tcherniakov, evidently the idea of a work that extols any kind of nationalist sentiment, superstition, romanticism or dealings with magic can’t possibly be played straight to a contemporary audience and have the same impact as it might have had for its original audience. On the other hand there are deeper human qualities brought out in Weber’s opera, and likewise Tcherniakov’s intention is not to subvert the work, but use a similar exaggeration and shock factor to highlight an underlying idea. How far would someone go to impress the boss and marry into an influential family?

Well one thing you don’t want to do is strike up a deal with the devil, or in the case of this production, get too friendly with and take the advice of the office weirdo, Kaspar. What he really does is encourages Max to pull the trigger that will open up his future destiny. He seems powerful and in control, but has strange ideas and hears voices and seems to be possessed, conversing with a split personality that he calls Samiel. He’s also a bit of a gun freak. Too late, Max worries what he has got himself into and he has good reason to be concerned when he agrees to follow Kaspar to Wolf’s Glen. 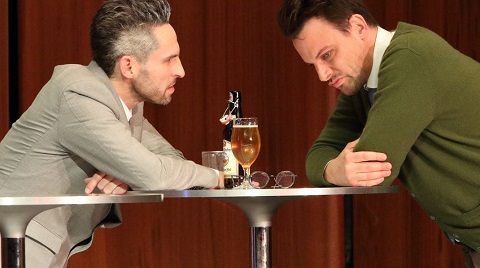 It does take a little twisting of the narrative to make this work, and where some might have more of an objection is in the director constructing his own narrative to put it into a quite different context from the original. In the gaps between scenes and in instrumental passages, Tcherniakov inserts subtitles that enter into the mind of the people involved and even creates a new narrative that you would think adds little, such as Agathe having previously been in a same-sex relationship with Ännchen, who dresses in a masculine if somewhat dandyish fashion. His take on the shock conclusion of the Hermit’s forgiveness being a mere delusion and Agathe indeed being a victim of the magic bullet, is like Carmélites revisionism again, but it’s enormously effective and appropriate here.

The more Romantic outlook on Der Freischütz would be the question of how far you would go for love when the path of virtue is the only road to salvation from the dark forces in the world, but Dmitri Tcherniakov‘s take on it as ambition and social climbing corrupting the soul can sit alongside that. You can debate whether that really gets under the skin of what the opera is all about, but there’s no doubt – as is always the case I find – that he fully brings dramatic power and conviction to whatever he works on. If you didn’t already know what a masterpiece Der Freischütz is, you would definitely feel it from the treatment here. 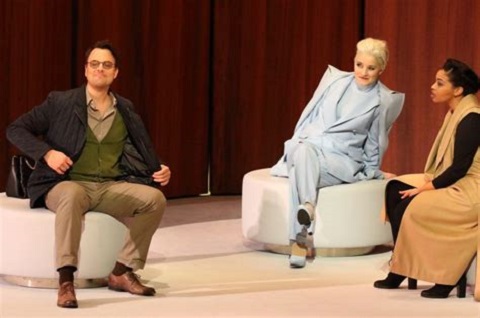 It also helps that the opera is played beautifully with Antonello Manacorda conducting the Bayerisches Staastorchester and there are some excellent singing performances. Golda Schultz in particular is impressive as Agathe and Pavel Černoch perfect as the rather unfortunate Max who falls under the spell as a wonderfully deranged Kyle Ketelsen as Kaspar/Samiel. It’s also a very handsome production as most of Elena Zaytseva designs are for Dmitri Tcherniakov. In his latest mode of using elegant, tasteful wooden panel lined rooms to satirise middle- and upper-class luxury homes and offices (La Traviata, Tristan und Isolde, Pelléas et Mélisande), they could be showcase exhibits for interior design. In every respect, Tcherniakov’s aim is perfect and his shot unerringly finds its true target.

Tim McGraw Does His Own Carpool Karaoke