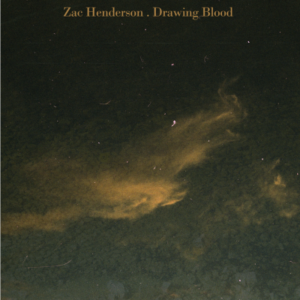 Having spent the last fours years establishing himself as one of Hobart’s best young songwriters, Zac Henderson returns for 2021 with a whole new swag of inviting music to share. Announcing the release of his debut album Lay The Stones, Henderson today shares the record’s lead single, ‘Drawing Blood’.

Reflective in tone, warm and rich in arrangement and delivery, the single serves as both a great introductory track and marker point of where Henderson is at this point of his artistic journey. His songwriting is marked by a great sense of wit and relatability, adding to the personal vibe of ‘Drawing Blood’ and the rest of the Lay The Stones record.

‘Drawing Blood’ is a delightful slow burner of a track, laden with bitter sweetness as the lyricism encapsulates hope, uncertainty and building optimism.

“‘Drawing Blood’ as a song has shifted a lot in the process between writing and recording. As a tune when I wrote it, it was acoustic guitar vocals and, I think, even harmonica. As the sounds and instrumentation in the song changed, so did my feelings about it. I enjoy being able to listen to these songs just to hear the elements of the band that played with me. The rises and falls in ‘Drawing Blood’ give the full album a nice dynamic in listening as a whole, and I hope you all enjoy it.” Zac Henderson

‘Drawing Blood’ is out now!
The album Lay The Stones is released Friday, January 22nd.

THINGS ARE ABOUT TO GO FULL TILT… YOUR NEWEST FESTIVAL IS EXPANDING, FULL TILT MELBOURNE EDITION IS HERE!

THINGS ARE ABOUT TO GO FULL TILT… YOUR NEWEST FESTIVAL IS EXPANDING, FULL TILT MELBOURNE EDITION IS HERE!